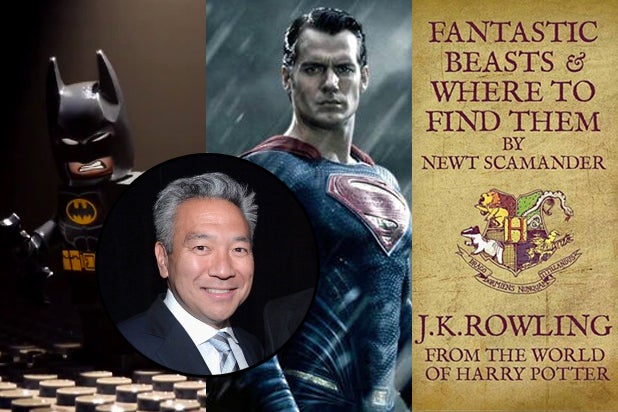 Chairman and CEO Kevin Tsujihara revealed details of the movies, including titles and release schedules, at the Time Warner investors meeting.

As TheWrap previously reported, “Lego Batman” was in the works at Warner Bros. The film will actually be the third in the franchise spawned by the blockbuster “The Lego Movie,” following “Ninjago” in 2016. “The Lego Batman Movie” is set for a 2017 release, and “The Lego Movie 2” will debut in 2018.

The studio will release the three films from Rowling’s original story and screenwriting debut “Fantastic Beasts and Where to Find Them” in 2016, 2018 and 2020. The stories feature magical creatures and characters inspired by Harry Potter’s Hogwarts textbook and its fictitious author, Newt Scamander.

The 10 DC movies to be released by Warner Bros. Pictures and New Line Cinema include:

Today at a Time Warner investors meeting, Warner Bros.’ Chairman and CEO Kevin Tsujihara outlined an aggressive content strategy for the Studio aimed at increasing profits while “doubling down on outstanding content, working with the best talent and maintaining the culture that makes Warner Bros. so great.”

“The demand for high quality video content is growing fast – in the United States and around the world – as new technologies have created new platforms and millions of new connected consumers,” said Tsujihara.  “The opportunity is huge.  And no studio is better positioned to take advantage of it than Warner Bros.”

As part of his presentation, Tsujihara announced a bold expansion of the industry’s broadest theatrical slate, built around the largest, most important global franchises.   Warner Bros. Pictures will release three LEGO-branded films over the next four years, building upon the enormous success of this year’s “The LEGO Movie” ($468 million worldwide box office), starting with “Ninjago” in 2016, directed by Charlie Bean and produced by Dan Lin, Roy Lee, Phil Lord and Chris Miller. Batman will take a star turn in “The LEGO Batman Movie” in 2017, directed by Chris McKay, and the sequel, “The LEGO Movie 2,” will debut in 2018.

The Studio will release three pictures, in 2016, 2018 and 2020, based on best-selling author J.K. Rowling’s original story and screenwriting debut, “Fantastic Beasts and Where to Find Them.”   Set in an extension of her familiar wizarding world, featuring magical creatures and characters inspired by Harry Potter’s Hogwarts textbook and its fictitious author, Newt Scamander, “Fantastic Beasts” will be directed by David Yates, who directed the last four Harry Potter movies, and reunite the filmmaking team of David Heyman, J.K. Rowling, Steve Kloves and Lionel Wigram.

And, in a massive expansion of the Studio’s DC Entertainment-branded content, Warner Bros. Pictures and New Line Cinema will release a slate of at least 10 movies–as well as stand-alone Batman and Superman films–from 2016 through 2020 that expands this prized universe of characters:

On the television front, Warner Bros. Television Group is the undisputed industry leader, providing 32 shows to the five broadcast networks and an overall roster of more than 60 shows among network, cable, first-run syndication and animation.  WBTVG will grow its leadership across multiple fronts, including cable, premium platform and kids programming as well as further its precedent-setting activities in SVOD and international television production and format sales.

Among the Studio’s programs are network TV’s #1 entertainment series in “The Big Bang Theory” and #1 unscripted series in “The Voice,” as well as favorites such as “Arrow,” “The Flash,” “Gotham,” “The Middle,” “Mom,” “Pretty Little Liars,” “The Vampire Diaries,” “The Bachelor” franchise, “The Ellen DeGeneres Show” and many more.

For Turner, Warner Horizon Television’s “Rizzoli & Isles” and Warner Bros. Television’s “Major Crimes” are two of the top three scripted series on all of basic cable for 2014, and the #1 and #2 shows, respectively, on TNT.  The Studio has a number of future projects set up at TNT, including a pilot production order for an untitled drama set in the unpredictable world of the Florida cocaine trade in the 1970s, from Jerry Bruckheimer, Michael Bay and Michelle Ashford, and is in development on “Titans,” from Academy Award-winner Akiva Goldsman and Marc Haimes, based upon the DC Comics characters.

At HBO, WBTV’s first series for the premium television company, the critically acclaimed “The Leftovers,” debuted this summer and has already been picked up for a second season.   WBTV has also produced the pilot “Westworld,” from executive producers J.J. Abrams, Jonathan Nolan, Jerry Weintraub and Lisa Joy, and starring Sir Anthony Hopkins, Ed Harris and Evan Rachel Wood, and has a number of other projects in development at the company.

Warner Bros. Animation is producing new series based on the Studio’s iconic brands, such as the upcoming “Be Cool Scooby-Doo!” and “The Tom and Jerry Show.” WBA’s “Teen Titans Go!” ranks as the #1 show in its timeslot against all kids’ networks.

For the first time ever, Warner Bros. Worldwide Television Distribution has licensed the exclusive subscription-video-on-demand (SVOD) rights to one of television’s most successful series ever, WBTV’s “Friends,” to Netflix in the U.S. and Canada.  Starting  January 1, 2015, Netflix members will have access to the entire 236 episode run of the series, which is still an enormous linear hit on cable (Nick at Nite and TBS) and in broadcast syndication.

Worldwide Television Distribution has also sold the off-network SVOD rights to the hit Warner Bros. Television series “Person of Interest” to Netflix in the United States.  The first three seasons of the series, which currently airs on CBS, will be made available to subscribers in fall 2015, at the same time the series premieres off-network on WGN America.

These two deals are just the latest examples of how the Studio’s hit series continue to serve as annuities for decades beyond their initial broadcast.  Further increasing the value of Warner Bros.’ library, since 1999, WBTVG has developed and produced 20 series that have reached the 100-episode milestone or will do so during the 2014-15 season.

“At Warner Bros., we are united to not only continue to create the world’s greatest entertainment content, but to over-deliver on our financial targets,” said Tsujihara.  “I’ve been with the company for over 20 years and I can’t remember a time when I’ve felt more confident about our future.  We’re committed to maintaining and enhancing the great legacy of Warner Bros., the world’s most iconic and profitable studio.”