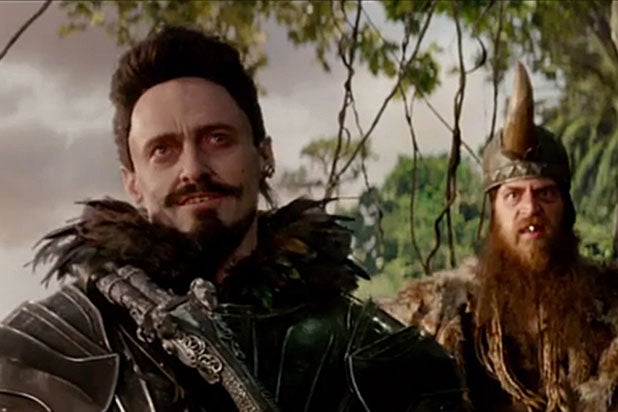 Warner Bros. has announced it will celebrate the release of Joe Wright‘s family adventure movie “Pan” with fan events around the world featuring stars Hugh Jackman and Levi Miller, with Rooney Mara and Garrett Hedlund joining them for several stops.

The whirlwind tour began on Sept. 2 in Australia, the home country of both Jackman and Miller, where “Pan” will make its global debut in theaters on Sept. 24. Melbourne students from five local public schools saw advance footage from the film, followed by a surprise Q&A with Jackman.

In London, Leicester Square is being transformed into the film’s vividly imagined Neverland, with the immersive take-over of its Gardens being opened to ticketed families for free on Saturday, Sept. 19.  Under canopies of colorful tents, guests can discover Blackbeard’s Pirate Training Tent, Pan’s Warrior Tent, Tiger Lily’s Kingdom and watch performances on the Jolly Roger Stage. The following day, Leicester Square will also host the gala worldwide premiere of “Pan” at the Empire Cinema and the Odeon Leicester Square. Screenwriter Jason Fuchs will join the cast at both the London and New York premieres.

In Hong Kong, from Sept. 18 to Oct. 11, the city’s Times Square Mall will host a massive installation entitled “Every Legend Has a Beginning.” Featuring a village inspired by Tiger Lily’s in the film, plus a Jolly Roger ship modeled after the one in Blackbeard’s fleet, the mall will offer a multimedia experience for fans with a variety of performances and imagery from the film and fans will have the opportunity to meet and greet Jackman on Monday, Sept. 28. On the same day, Jackman will also become the first international star ever to participate in the Chinese Mid Autumn Festival celebration in Hong Kong, the Fire Dragon Festival. As a special honor, Jackman will be asked to hold the Fire Dragon’s pearl in the parade.

On Oct. 1, Jackman, Miller and Wright will fly to Tokyo for the film’s premiere event, streamed live online from the Roppongi Hills Area at the Keyakizaka Complex, which will be transformed from stem to stern in the style of Neverland. The stars will be joined there by major Japanese musical artist Seiko Matsuda, before heading onto the TOHO Cinemas to view the film, which opens across Japan on Oct. 31.

New York City hosts the gala U.S. premiere at the legendary Ziegfeld Theater on Sunday, Oct. 4, ahead of the film’s Oct. 9 nationwide debut.

In Mexico City on Tuesday, Oct. 6, the trio of Jackman, Miller and Wright will attend the film’s Latin American premiere at the all-new Toreo Parque Central’s vast Cinepolis Complex. With designs inspired by the Neverland natives’ village, Mermaid Lagoon and the Jolly Roger itself, a special live drum performance will be part of one of the most spectacular premiere events ever hosted in the country.  All of these iconic Neverland elements will remain at Toreo Parque Central until Oct. 18, giving families the opportunity to visit this exhibition for 12 extra days.

As Neverland sweeps the globe, a dazzling selection of the film’s costumes will simultaneously be debuting in exhibits throughout Asia, Europe, Latin America and the U.S. Costume designer Jacqueline Durran’s creations for Jackman’s Blackbeard, Miller’s Peter, Hedlund’s Hook and Mara’s Tiger Lily will be showcased at or around the events in Hong Kong at Times Square Mall, London, New York City, Madrid and Mexico City. Added stops include Prague, Dubai, Athens and more, with exact locations and dates to be announced.

There will also be mall installations including Brazil, Italy, the UAE and beyond, plus an airship with the Jolly Roger hitting the skies above Germany at events in Hamburg and Frankfurt.

Wright directed “Pan” from a script by Fuchs, based on the beloved characters created by J.M. Barrie. Greg Berlanti, Sarah Schechter and Paul Webster produced the film, which was executive produced by Tim Lewis.

Amanda Seyfried co-stars as Mary alongside Adeel Akhtar as Smee; Taejoo Na as Kwahu; Nonso Anozie as Bishop; Kathy Burke as Mother Barnabas; Kurt Egyiawan as Murray; Lewis MacDougall as Nibs; and Jack Charles as The Chief. The film is set for a worldwide release in 2D and 3D.