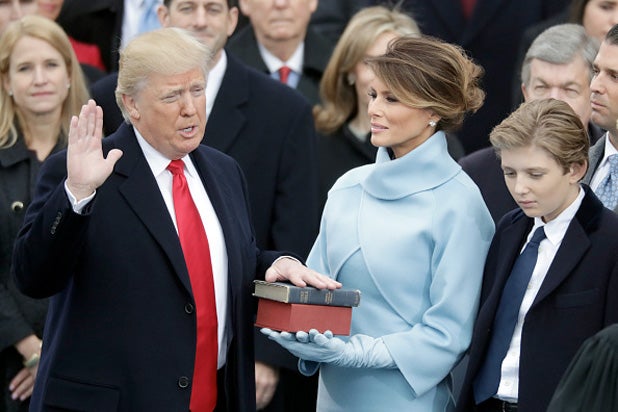 At 9 a.m. on Inauguration Day the streets of Washington, D.C., were empty, almost deserted, like a conquered city had surrendered and residents were quietly waiting inside for the invaders to arrive in force.

But not everybody was waiting.

Lots of Washingtonians, it turned out, had simply decamped to parts elsewhere for the arrival of President Donald Trump, an event they were eager to miss. 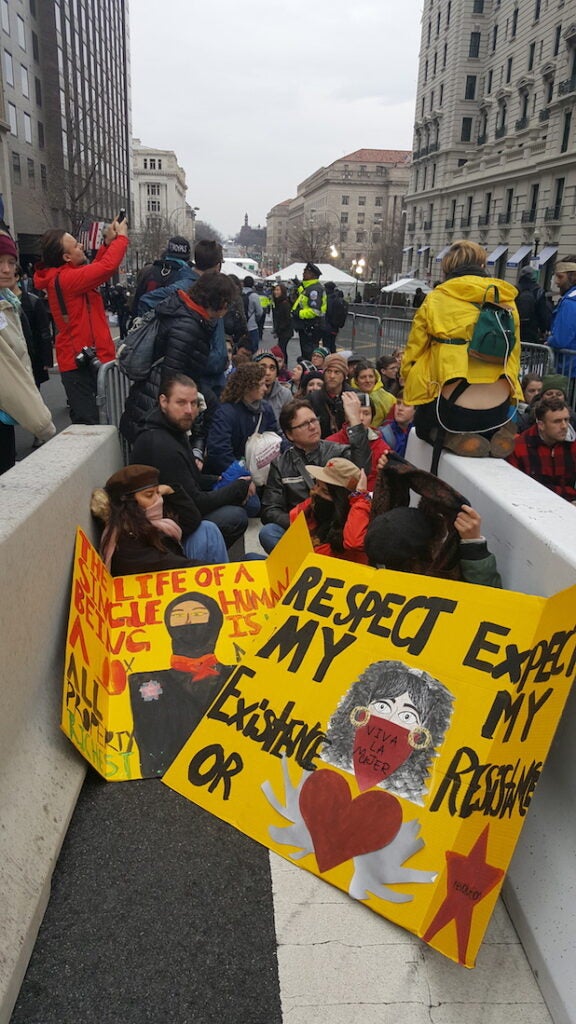 The city felt less like a place celebrating democracy than an armed camp, with heavy concrete barriers blocking many of the city’s main streets, and much more imposing materiel blocking others — huge trucks turned sideways, Humvees positioned to block any suicide attacks.

As a result, the parts of downtown that weren’t entirely blocked to traffic were a snarl of unmoving taxis and Ubers and police cars — except for those who got through on pedicabs and golf carts.

Also Read: See All of Trump's Changes to the White House Website (So Far)

At the Politico Inauguration Hub where TheWrap partnered on a number of panel discussions, Mike McKenna, who headed the Trump transition team on energy and the environment, clashed with Fisher Stevens, the producer of “Before the Flood,” a documentary that urges action on the issue.

Political plates were shifting in real time. Collin O’Mara, a friendly sort who heads the National Wildlife Federation, pointed out that just before the panel began the new administration had already taken the words “climate change” off the Whitehouse.gov website.

Hey, said McKenna in the divisive spirit of the day, “No one can be surprised that a fellow who ran saying ‘I don’t think [climate change] is legit’ … changed the brand.” 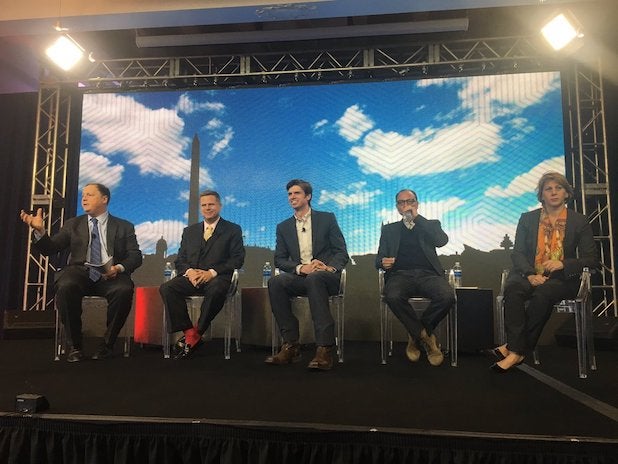 Politico’s editor in chief John Harris sought middle ground, and it was hard to find. “What would be the Nixon-in-China approach” for this new administration, he suggested?

So it went. At the National Press Club, Michael Moore was as fired up as he has ever been and viciously anti-Trump. He told a packed room of mostly young women gathered by the Huffington Post and Bustle not to despair, not to back down, to take the fight to the new administration. They cheered and leaped to their feet.

In a chat with me afterward, Moore predicted that Trump would not last (this is significant because Moore predicted back in the summer that Trump would win). How was he so sure? “He’s a malignant narcissist,” Moore said matter-of-factly, explaining that something must have happened to the new president at boarding school that scarred his personality.

Everywhere, pundits and political insiders were in the throes of deciding how to approach this new beast, the Trump administration. One challenge for journalists is how to remain dispassionate with a President who is openly hostile to the media, who baits and insults reporters even on Inauguration Day (asking his supporters whether to keep his Twitter account so as to avoid the “dishonest media”).

Beau Willimon, creator of “House of Cards” and a participant at one of TheWrap’s panels, said it’s the media’s responsibility to demand that Trump grant them access. He suggested a daily vigil at the White House to pressure the new president to have press briefings. Asked about this, Harris said this was probably not the most productive use of the media’s time, all things considered.

Elsewhere, the Creative Coalition — a Hollywood-led group that seeks to remind Washington, D.C., of the importance of funding the arts — valiantly led an evening to rally support for the subject. CEO Robin Bronk and president Tim Daly exhorted a mostly-full theater to rally to the latest challenge, a plan to cut federal funding for the National Endowment for the Arts. The mood was about as upbeat as you can get given the circumstances: The most positive spin was that a threat to cut funding will fire people up.

Meanwhile, at the northwest home of my friend, Aviva, a documentarian, a group of mostly female progressives gathered to debate — still? — the failures of the Democrats during the last election, and to plot their movements during the Women’s March on Saturday.

One thing they mostly agreed upon: Melania Trump’s blue Ralph Lauren outfit at the inauguration was beautiful. And it’s going to be a long four years.