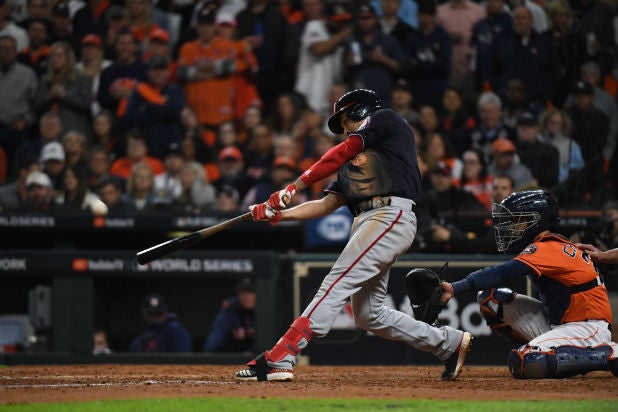 With a 6-2 final score, the Washington Nationals on Wednesday defeated the Houston Astros to win the 2019 World Series.

In addition to Securing the Nationals their first Major League Baseball Commissioners Trophy, the win also came during the first World Series appearance in the team’s storied 50-year history (they originated as the Montreal Expos).

The victory is only the second for a team from Washington, D.C.; the last happened back in 1924 with the Washington Senators — now known as the Minnesota Twins. The Nationals’ official Twitter account celebrated the city’s milestone shortly after securing the win.

For the first time in 95 years, the #WorldSeries champions are from Washington, DC.#STAYINTHEFIGHT pic.twitter.com/wxYc9XbQYo

The Nationals entered the series as something of an underdog favorite, thanks mainly to a self-inflicted PR headache by the Houston Astros. After the Astros advanced to the World Series on Oct, 22, the team’s assistant general manager Brandon Taubman taunted several female reporters, including one wearing a purple domestic-violence awareness bracelet, by yelling “Thank God we got Osuna! I’m so f—— glad we got Osuna!”

Astros pitcher Roberto Osuna was arrested in May 2018 for assaulting the mother of his three-year-old son while pitching as a member of the Toronto Blue Jays. Two months later, the Astros traded for Osuna despite the arrest. Charges against him were subsequently dropped in exchange for a restraining order after the victim declined to testify.

The Astros made the situation worse when the Team’s management accused Stephanie Apstein, the Sports Illustrated reporter who broke the story, of lying. After several other eyewitnesses, including other sports reporters, backed up Apstein’s account, the Astros fired Taubman. Houston Astros owner Jim Crane apologized to Apstein on Oct. 27.