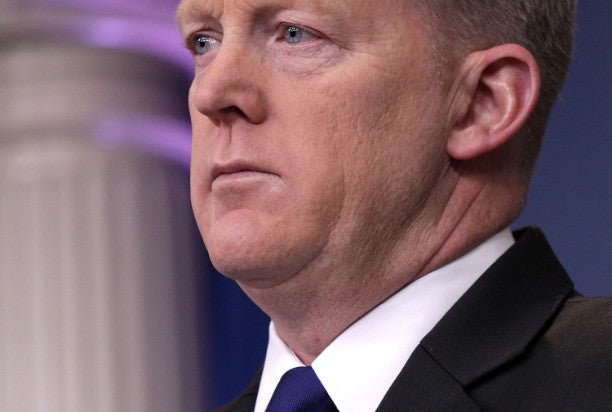 The Washington Post issued a correction after originally reporting that White House Press Secretary Sean Spicer was hiding out “in the bushes” on the White House lawn Tuesday night as he prepared to answer questions from reporters about the firing of FBI director James Comey. It seems he was simply “among” the bushes.

The story now features the following editor’s note: “This story has been updated to more precisely describe White House press secretary Sean Spicer’s location late Tuesday night in the minutes before he briefed reporters. Spicer huddled with his staff among bushes near television sets on the White House grounds, not ‘in the bushes,’ as the story originally stated.”

The story paints a picture of a flustered Spicer who was not prepared to answer on-camera questions regarding Comey’s sudden dismissal. Twitter had fun at Spicer’s expense, with many users mocking him for hiding in the bushes while demanding that reporters turn off their lights.

Meanwhile, Spicer is skipping press briefings for the remainder of the week because of obligations as a member of the U.S. Navy reserve. Deputy White House Press Secretary Sarah Huckabee Sanders filled in on Wednesday and will continue to do so through Friday.

CNN’s Jim Acosta tweeted on Wednesday that President Trump is “evaluating Sanders” after Spicer’s “disaster” among the bushes outside the White House.

He has emerged as a household name because of his often-combative press briefings and high-profile gaffes. He is famously portrayed on “Saturday Night Live by Melissa McCarthy, who will host “SNL” this weekend.

It will be interesting to see if Trump backs off now that the Post has changed the description of the situation.