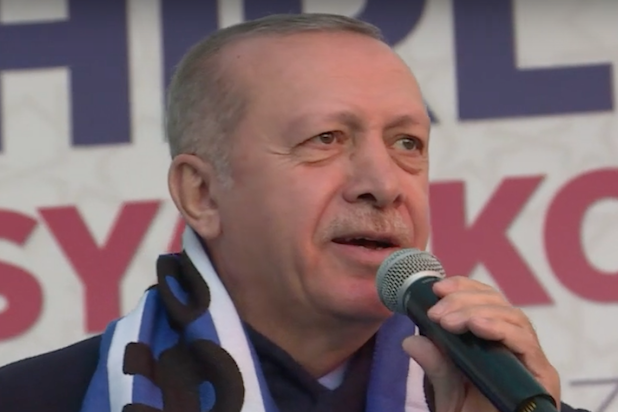 The Washington Post is facing heat after publishing an op-ed by Turkish President Recep Tayyip Erdogan on Tuesday, with many noting Erdogan’s history of jailing journalists in his own country.

In the piece, Erdogan argued that the world should see no difference between the attack in Christchurch, New Zealand, that left 50 dead and the radical islamic terrorism of ISIS.

“As a leader who has repeatedly stressed that terrorism has no religion, language or race, I categorically reject any attempt to associate last week’s terrorist attacks with the teachings, morals or maxims of Christianity. If anything, what happened in New Zealand was the toxic product of ignorance and hate,” Erdogan wrote. “We must establish that there is absolutely no difference between the murderer who killed innocent people in New Zealand and those who have carried out terrorist acts in Turkey, France, Indonesia and elsewhere.”

The words of unity, however, were met with scorn from many online — who argued the paper should not be giving a platform to Erdogan. In 2018, the Committee to Protect Journalists called him the “world’s worst jailer” of reporters.

“Even as Turkish President Recep Tayyip Erdoğan has been the fiercest critic of Saudi Arabia for the murder of Khashoggi, his government continued to jail more journalists than any other on the planet,” the organization reported. “For the third consecutive year, every journalist imprisoned in Turkey is facing anti-state charges.”

Reps for the Washington Post or the Committee to Protect Journalists did not immediately respond to a request for comment from TheWrap.

“As Erdogan’s op-ed runs under the “democracy dies in darkness” tagline, a quick reminder that Turkey was the number one jailer of journalists in 2018, per the Committee to Protect Journalists,” Daily Caller investigative reporter Peter Hasson added.

The Post Opinion pages couldn’t find someone who doesn’t imprison journalists (among other concerns) to write this take? https://t.co/j38aOondUT

As Erdogan's op-ed runs under the "democracy dies in darkness" tagline, a quick reminder that Turkey was the number one jailer of journalists in 2018, per the Committee to Protect Journalists https://t.co/cGm8sTNIzt

A radical Islamist tyrant @RT_Erdogan who tortures journalists, has $B's in global media power and btw just used actual video carnage from #ChristcurchMosqueAttack to rile up his Islamist campaign rallies is platformed @washingtonpost instead of @AIFDemocracy? #DemocracyDying https://t.co/S5sLAOFIlC

There are plenty of Muslim leaders who have the moral standing to write an article like this. Erdogan is not one of them. Great job WaPo https://t.co/uyAYztMqMZ

How do you hacks keep running this journalist murderer https://t.co/naKmCjkU7q

The @washingtonpost gives one the world's biggest jailers of journalists ( @RT_Erdogan ) a space to share his "opinion" https://t.co/kPbjG1aZzF