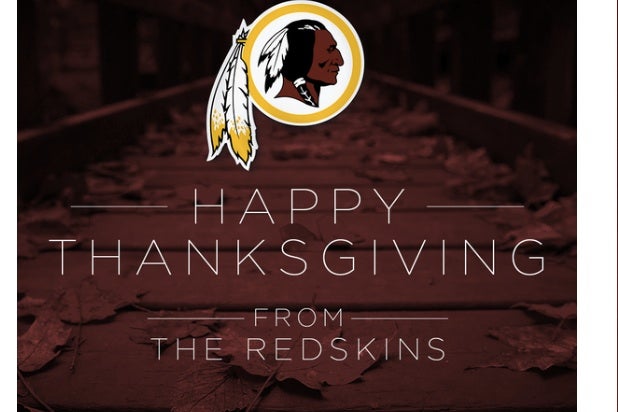 The ire of social media never rests, not even on Thanksgiving.

The NFL’s Washington Redskins–long playing defense against critics and even politicians campaigning for it to change its name from what they perceive to be an offensive slur against Native Americans–received that ire Thursday for a tweet they apparently didn’t realize was offensive (see above).

The angry tweets starting rolling in:

the F’n irony of the @Redskins wishing a happy thanksgiving from the dictionary defined slur ref to our bloody scalps pic.twitter.com/jqZOsCBFR7

Don’t think the Indians were happy RT @Redskins: From our family to yours, have a very safe and Happy Thanksgiving pic.twitter.com/AXIidBQpi0

Disrespectful RT @Redskins: From our family to yours, have a safe & Happy #Thanksgiving. #HappyThanksgiving #HTTR pic.twitter.com/dbWJkNcjiv

The tweet, with the indian image, obviously was salt on Native American wounds on Thanksgiving, a day that celebrates the migration of Pilgrims and Puritans from England to New England. However many Native Americans consider the day one of mourning, as many were slaughtered or traded as slaves by the English men and women who came over.

The term Redskins is very polarizing, as Washington Redskins owner Dan Snyder has been implored to change the name as it is considered a derogative slur against Native Americans.