When people say “don’t meet your heroes,” it’s because it’s obviously way cooler to beat them at their own game then earn a spot playing alongside them.

11-year-old drumming phenom Nandi Bushell did just that when she joined Foo Fighters onstage for an epic performance of “Everlong” Thursday night and squashed her “beef” with frontman Dave Grohl.

The pair had playfully sparred during the pandemic in a series of virtual “drum-offs” that ultimately left the U.K. preteen victorious.

Grohl regaled the crowd at The Forum in Los Angeles with the story of how he became acquainted with the “most badass drummer in the world”–and how he got his ass whooped.

“One day I picked up my phone, and my friends were all texting me asking if I had seen this s–t? And I clicked on the link and I see someone is challenging me to a drum-off,” he said. “So I’m like, ‘Isn’t that nice?’ I kind of brush it off. But all my friends tell me, ‘No dude, you have to step up. This is the real deal. This is a drum-off!'” 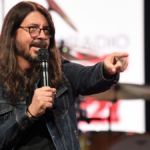 Grohl explained that he was not only struck by Bushell’s talent and passion for her instrument but the way in which their drum battles provided a brief respite for fans during such trying times.

“This person inspired me last year so much, and I’ll tell you why,” Grohl said. “Because in a time when you would pick up your phone or turn on your computer and all we had was bad news, for that one day, you’d pick up your phone and see that connection between two people who never making music together and spreading joy and love all across the world.”

Grohl then brought Bushell out to the hundreds of fans chanting, “Nandi, Nandi!” as she took her place at the drum kit and promptly slayed one of the group’s classics, “Everlong,” to close out the show.

“It Happened!!! It was #EPIC!!!” Bushell later posted on YouTube alongside a video of her performance. “Tonight I jammed with the @foofighters live @theforum!!! Wow!!! What an INCREDIBLE night! THANK YOU @foofighters @davestruestories! Thank you @taylorhawkinsofficial thank you everyone who made this possible!!! #foofighters #davegrohl #theforum #everlong – It’s my Daddy screaming a lot and filmed this video. MORE TO COME!!!” 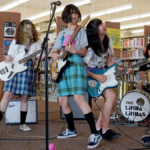