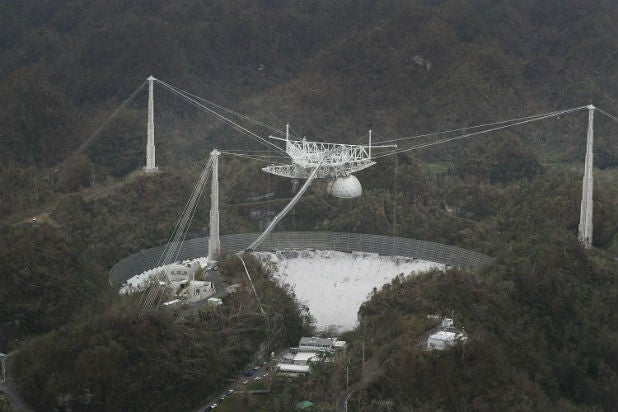 The end of an era came unexpectedly this week when the iconic Arecibo Telescope in Puerto Rico collapsed Dec. 1 exactly one month after its 57th birthday. And as it happens, the whole thing was captured in spectacular drone footage that you can watch here right now.

Drone footage of the Arecibo collapse. I can't believe the timing that they had a drone in the air when this happened. What strange luck. Source: @NSF pic.twitter.com/Kpfw47moAC

The telescope, which became operational in 1963 and until 2016 was the world’s largest spherical reflector dish, was for decades a crucial tool in the advancement of astronomy. While used primarily for research in atmospheric science and both radio and radar astronomy, it was perhaps best known as a key NASA tool for monitoring near-earth asteroids, and as part of the search for extraterrestrial intelligence.

Among the discoveries made using the telescope: Mercury’s 59-day rotation period; the first solid evidence supporting the existence of neutron stars; the Nobel prize-winning discovery of the first binary pulsar; the first observation of a comet using radar; and the first identified extrasolar planets.

It was also well known for appearances in several pop culture milestones, most famously the James Bond film “GoldenEye” (1995), where it was used in the film’s climax as the villain’s secret base. It also appeared in the films “Species” (1996) and “Contact” (1997), and an episode of “The X Files,” as well as multiple video games and novels.

Alas, over the 2010s it was battered by a series of severe, climate change-linked tropical storms and hurricanes, culminating in terrible damage inflicted by Hurricane Maria in 2017. Unfortunately, the 2016 election led to a government unwilling to fund repairs. Though new sources of funding were cobbled together late in 2018, in late Nov. 2020 it was determined there was no way to safely repair the telescope and the National Science Foundation announced it would be decommissioned.

The decommissioning was supposed to proceed after NSF determined the safest possible method, but physics had other plans. So it is that on Dec. 4, the whole thing up and collapsed with almost no warning.

But, even though the end of 60 years of scientific progress is sad, we’re glad a historically significant event like that was at least captured on video. You can see more from the collapse here, and watch how the telescope was used in “GoldenEye” below.