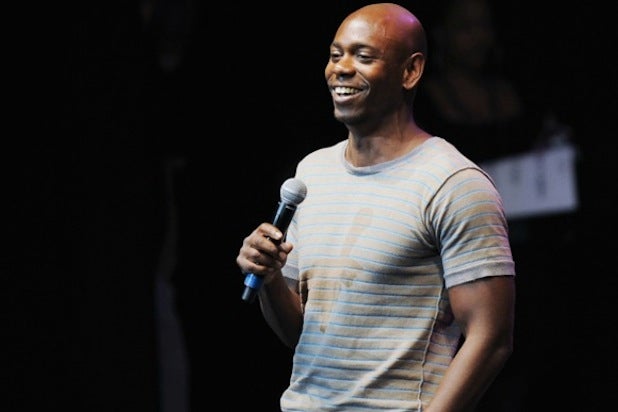 Things seem to be going OK with Dave Chappelle’s career these days, but if he ever needs to pick up some extra cash, maybe he can take up lounge singing.

The former “Chappelle’s Show” star shared a stage with John Mayer in Los Angeles this week, dueting with the singer on the Nirvana classic “Come as You Are.”

The performance was captured on video and posted on Instagram by an attendee, who raved, “Let’s talk about how I go to see #JohnMayer for $10 at the amazing Hotel Cafe and DAVE CHAPPELLE SHOWS UP and then they do A NIRVANA TRACK TOGETHER what a magical night.”

As might be expected, Mayer carries most of the weight on the cover, with Chappelle occasionally chiming in on the microphone, when not taking sips from his bottle.

Mayer performed at the 200-capacity Hotel Cafe, which he’s played at before, on Tuesday. According to Live for Live Music, he and Chappelle played multiple covers. Mayer, meanwhile dipped into his catalog to perform “Who Says,” “Big Shirt” and others, as well as a new song “Move On, Getting Over.”

Let’s talk about how I go to see #JohnMayer for $10 at the amazing Hotel Cafe and DAVE CHAPPELLE SHOWS UP and then they do A NIRVANA TRACK TOGETHER what a magical night ??????’-

Watch Mayer and Chappelle kick out the jams in the video.

11 years after walking from his hit Comedy Central show, Dave Chappelle is making a big return to TV

Eleven years after he walked away from one of the most successful shows in Comedy Central history, Dave Chappelle is hosting "Saturday Night Live" with the remaining members of A Tribe Called Quest as musical guests. It's a surprising move for the wildly popular but enigmatic comedian, whose career has been marked with long absences, sudden appearances and controversial stand-up performances. Here's a quick timeline...