As TheWrap previously reported, Lewandowski was charged with battery in connection with an altercation with Fields, who alleges that on Mar. 8, Lewandowski nearly yanked her to the ground after she tried to ask Trump a question.

An eyewitness account from Washington Post reporter Ben Terris, who was near Fields when the alleged incident occurred, corroborated her version of events. But Lewandowski denied any wrongdoing, calling Fields “delusional.”

But authorities in Jupiter, Florida, where the alleged incident took place, don’t seem to buy Lewandoski’s version of the events.

The Jupiter PD released a video which seems to show Lewandoski grabbing Fields by the left arm. The picture below shows the moment as it happened. Lewandowski appears at Trump’s left. Fields is wearing a a tan shirt. 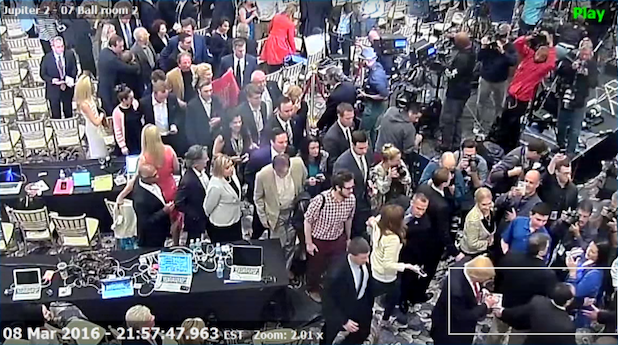 The police report also states that Fields played an audio of her interaction with Trump at the moment when she asked him question.

“During the audio portion immediately after the incident, Fields is heard saying, ‘Holy shit, I can’t believe he just did that…. That was so hard. Was that Corey?”

Terris can then be heard saying, “He just like threw you out of the way, like what threat were you?”

The report goes on to say that the police officer then spoke to Terris who claimed Fields was “yanked.”

The officer ends his report by saying he then obtained “video footage from Trump security,” which “paralleled what Fields had told me,” adding that Lewandowski appeared to reach for Fields’ left arm with his left hand allowing him to get closer to Fields. Lewandoski then grabbed Fields left arm with his right hand causing her to turn and step back.”

The officer concludes that based on his investigation, there is “probable cause” to charge Lewandoski.

Watch the video from Jupiter police above.