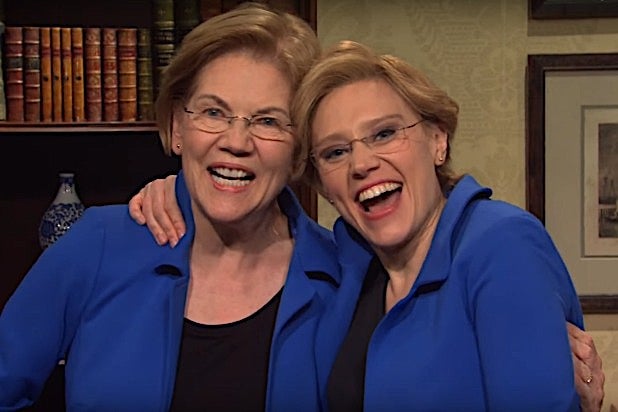 Elizabeth Warren pulled off a surprise appearance on this week’s “SNL” cold open, but the fun continued behind-the-scenes when Kate McKinnon flipped on her smartphone and recorded the former Democratic presidential candidate impersonating McKinnon impersonating her.

And it’s impossible not to watch it, like, a dozen times in a row.

This week’s cold open had McKinnon playing Laura Ingraham, conservative host of Fox News Channel’s “The Ingraham Angle” echoing the Trump administration’s line that the coronavirus outbreak is not a big deal. Near the sketch’s end, McKinnon’s Ingraham introduced Warren “live via satellite” to “I don’t know, scold us for owning cars.”

After a few minutes of McKinnon’s Ingraham talking with Warren, McKinnon did a quickie wardrobe and wig chance, threw on a pair of glasses, and rushed into Warren’s frame, where they kicked off the show with a simultaneous, “Live from New York, it’s Saturday Night!”

Also Read: 'SNL': Rachel Dratch Brings Back Debbie Downer to Bum Us Out About Coronavirus (Video)

“ok this is legendary,” Alexandria Ocasio-Cortez commented. The New York congresswoman was not alone in her thinking because within seven hours, the tweet was retweeted more than 83,000 times and got 400,000 like. And those are growing by the second.

Warren dropped out the presidential race on Thursday after failing to win any states — including her home state of Massachusetts — on Super Tuesday, confirming the news in a Medium post her campaign then tweeted.