Trump insisted,”it was elevated to an A.”

But Kelly did not back down, citing a class action suit of 5,000 plaintiffs involving veterans, teachers and “so-called little guys” who say that they were “fleeced.”

Kelly then hit Trump again, saying that he countersued the lead plaintiff in the class action, and read  a damaging comment from the court of appeals in the case: “The plaintiffs against you are like the Madoff victims …”

She continued to cite the appeal ruling: “Victims of the con artists often sing the praises of their victimizers until the moment they realize they have been fleeced.” 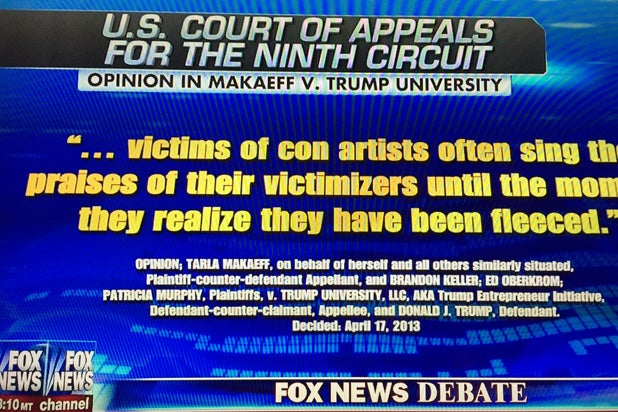 Trump shot back, “Give me break,” he said, adding, “Lets see what happens  at the end of a couple of years when this case is over.

Marco Rubio then interjected, saying that Trump refused to refund money to those who asked.

Trump shot back that the biggest con artist is Rubio for never showing up to vote, saying “the people of Florida wouldn’t elect him [as] dog catcher.”