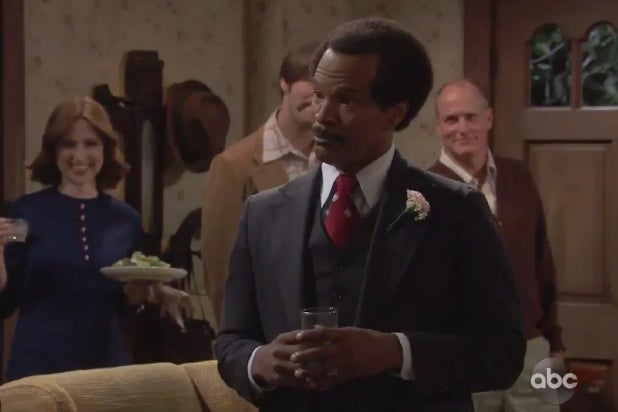 Jamie Foxx had a hilarious slip up while playing George Jefferson on Jimmy Kimmel’s live re-creation of classic Norman Lear sitcoms “The Jeffersons” and “All In The Family.”

The 90-minute primetime special that aired Wednesday, May 22 on ABC re-created one episode each from “All in the Family” and “The Jeffersons,.” The all-star cast was led by Woody Harrelson and Marisa Tomei as Archie and Edith Bunker, and Foxx and Wanda Sykes as George and Louise Jefferson.

And understandably, since the whole production was filmed live in front of a studio audience, one or two mistakes were bound to happen.

Also Read: Jimmy Kimmel to Re-Create 'All in the Family,' 'The Jeffersons' Episodes Live

“Ever since I was a little boy, I would always beg my mother for a little brother. But you know we were broke, so all –” Foxx begins, before stuttering repeatedly on the last word.  “It’s live,” he quips, turning around and breaking character. “Everyone sitting at home thinking their TV just messed up.”

Fans caught the moment in which Foxx jumbled his words and briefly broke character and documented the clip on Twitter.

Plenty of fans had nothing but praise for the way Foxx handled the flub.

Jamie Foxx playing it cool when he messes up on #AllInTheFamily pic.twitter.com/PwyYcLrxUR

Other viewers singled out Marisa Tomei’s immunity to corpsing.

Wanda Sykes also celebrated for her turn as Louise.

Wanda Sykes is a PRO. She was standing there and not letting Jamie Foxx break her at all. #AllInTheFamily #LiveInFrontOfAStudioAudience pic.twitter.com/WvUeELnm1Q

And of course, more praise for Foxx’s eerily on-point portrayal of the character originated by the late, great Sherman Hemsley.

Jamie Foxx is killing it! Sherman Hemsley would be proud. #Allinthefamily pic.twitter.com/QPnMCteoOR