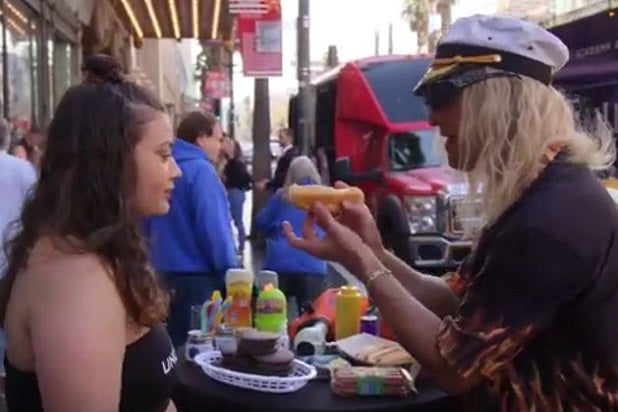 Some people can be real buzzkills. Matthew McConaughey is the opposite — he’s all about creating a buzz where there’s really none to be had.

At least that was the case during a segment on Thursday night’s “Jimmy Kimmel Live!”

During the segment, McConaughey, dressed as his character Moondog from his new film “The Beach Bum,” took to Hollywood Boulevard to offer passersby a variety of marijuana-infused products.

Spoiler alert: There was no marijuana in said items.

Still, that didn’t stop some marks from feeling — or at least pretending that they were feeling — high after sampling McConaughey/Moondog’s faux weed products.

Such as the woman who tried out McConaughey’s “pot dog” — supposedly containing tomatoes and mustard infused with THC.

Her assessment after chowing down? “Like, tingly,” she offered, when McConaughey asked her how she was feeling.

Or the gent in the tie-dye shirt who, after quaffing down a brownish liquid, declared, “I’m feeling a little something. Something, like, relaxing coming over me … Yeah, like I’m at the beach.”

And then there was the poor woman who suddenly found that her legs were “like gummy bears” after not ingesting THC. Or at least, not any THC that McConaughey gave her.