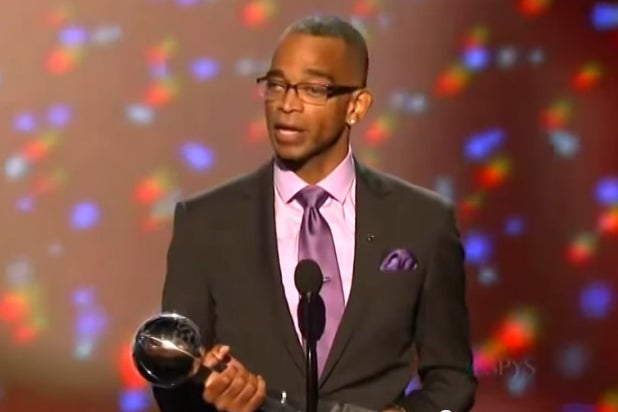 Stuart Scott at the 2014 Espys/Getty Images

ESPN “SportsCenter” anchor Stuart Scott was given the 2014 Jimmy V Perseverance Award at last summer’s ESPY Awards, following a recurring battle with cancer that ultimately claimed his life on Sunday.

Scott struggled to even make it to the Los Angeles ceremony — but he did — and when he took the stage, the sports broadcaster took the entire room with him on a beautiful, tear-jerking journey from the moment Kiefer Sutherland welcomed him to the podium.

Scott spoke glowingly about his daughters, his girlfriend, his doctors and nurses, his co-workers and bosses. At one point, he said, “I’m not special.” That’s the only place in the poignant, moving speech where he was wrong.

At the end of his time on stage, he asked his youngest daughter to join him for a much-needed hug. TheWrap was in the audience — we all could have used a much-needed tissue at the time.

The Jimmy V Perseverance Award is named after former college hoops coach Jim Valvano, who told others “don’t ever give up.” Valvano passed away two months after receiving the original ESPY Award for inspiring the sports community. His own incredible speech in the face of death has gone down in awards show history. Scott more than did it justice last year.