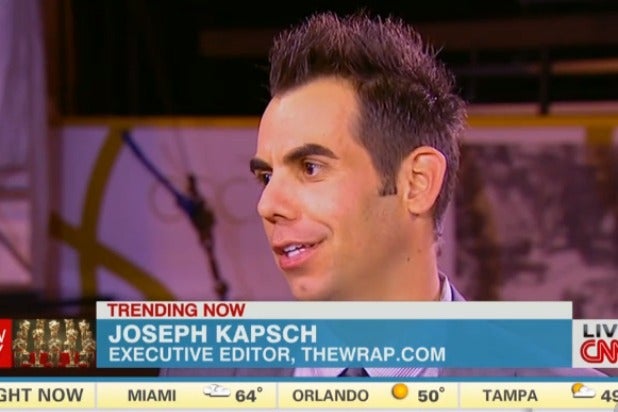 Will Leonardo DiCaprio finally get an Oscar for “Wolf of Wall Street?” Who will win the three-way race for Best Picture? Can anyone stop Cate Blanchett?

TheWrap executive editor Joseph Kapsch, along with Deadline Hollywood’s Pete Hammond, fielded those and other questions for CNN’s New Day Friday, live from the Red Carpet outside the Dolby Theater in Hollywood.

Michaela Pereira asked if this is finally DiCaprio’s year, and Kapsch had to say that it probably is not.

“You know what? I think Leo’s performance was amazing, but I don’t see any equation on Sunday night that Matthew McConaughey is not walking up to the podium to collect the Oscar,” he said.

Will Dylan Farrow’s allegations that Woody Allen assaulted her doom Blanchett’s chances of a win for “Blue Jasmine”? Kapsch said Blanchett addressed the issue appropriately in a statement earlier this year.

“It was very classy how she approached the subject,” said Kapsch. “I don’t think there’s anything that’s going to stop her from winning the Oscar.”

For more of Kapsch’s picks — including in the Best Picture race — watch the video: