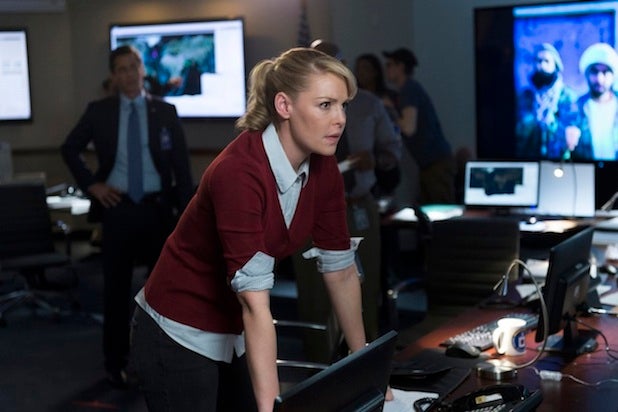 NBC unveiled its 2014-2015 schedule, including new offerings such as “Bad Judge,” A to Z” featuring “How I Met Your Mother” alum Cristin Milioti and more.

Click the video below to watch trailers for the new offerings.

“Bad Judge” stars Walsh as a judge by day, party animal at night.

In “State of Affairs” (pictured), “Grey’s Anatomy” alum Katherine Heigl plays a key CIA attaché who counsels the president on high-stakes incidents around the world. She balances her intense political responsibilities with a complicated personal life.

Starring Cristin Milioti. the whimsical romantic comedy “A to Z” is set in the world of an online dating company that details the “A to Zs” of a relationship, from meeting to break-up. Our ensemble navigates the complicated world of modern dating and poses the question: Is there such a thing as destiny?

“Constantine” is based on the “Hellblazer” graphic novels. David Goyer (Batman Begins) and Daniel Cerone (Dexter) bring to life one of DC Comics’ most popular characters, master of the occult John Constantine. Constantine is struggling with his faith as he is haunted by the sins of his past, but he is suddenly thrust into the role of defending humanity from the gathering forces of darkness.

“Marry Me” is a single-camera comedy that centers on a longtime couple who get engaged — only to quickly realize that it’s harder than it looks.

Based on a Spanish format, “The Mysteries of Laura” is a procedural drama with a sharp sense of humor following a quirky female homicide detective (Debra Messing) who juggles high-stakes crime as well as her ex-husband and devilish twin boys.