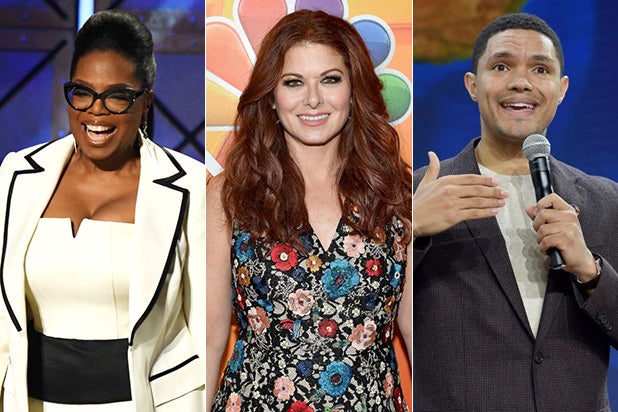 Not able to attend the Tribeca TV Festival this month? Luckily, you’ll be able to livestream some of the festival’s panels, which will include big names like Oprah Winfrey, Trevor Noah and others.

Tribeca announced exclusively with TheWrap Thursday that it’ll be livestreaming talks from its lineup on Facebook Live – the only way off-site audiences will be able to watch the panels.

That means you can watch a conversation with Winfrey, for example, who will be on hand to discuss the new OWN docuseries “Released,” which chronicles the lives of formerly-incarcerated men and women as they rejoin the real world. The group, which includes Winfrey and the creators of the show, will discuss the issue of mass incarceration, among other related topics. The discussion will follow the premiere of the first episode.

Elsewhere, viewers can watch a panel with “Will & Grace” stars Debra Messing, Eric McCormack, Sean Hayes and Megan Mullally, who will be joined by co-creators Max Mutchnick and David Kohan. Tribeca promises the group will discuss what to expect in the upcoming batch of new episodes.

Another big panel at the Tribeca TV Festival, presented by AT&T, includes one with Trevor Noah and writers from “The Daily Show” about the late night scene and how people tune in to get their news.

The Tribeca TV Festival runs from Sept. 22-24 in New York City. You can view the full streaming schedule below (all times are Eastern Daylight Time).

Also Read: Joanne Froggatt Has No Memory of Her Date With Ioan Gruffudd in 'Liar' Preview (Exclusive Video)

The Tribeca TV Festival is presented by AT&T.