(Warning: The following story contains MAJOR spoilers from both the first episode of HBO’s “Watchmen,” and the DC Comics graphic novel.)

With the premiere of HBO’s “Watchmen, we finally know how Damon Lindelof is tackling the acclaimed graphic novel written by Alan Moore and drawn by Dave Gibbons: with both broad strokes and targeted precision.

Lindelof has described his version of “Watchmen” as a “remix” of the original comic, and that’s true. Featuring a new story and a new host of characters, it’s set 30 years after the events depicted in the comic, swapping 1980s Cold War anxieties for a contemporary story centered on race relations and police authority.

But the show frequently also makes it clear that the world in which it exists stems directly from the events of the comic. Below, TheWrap has rounded up every way those events are referenced in the premiere episode, and how they could tie into the larger story Lindelof wants to tell.

Also Read: 'The West Wing' to Move From Netflix to HBO Max 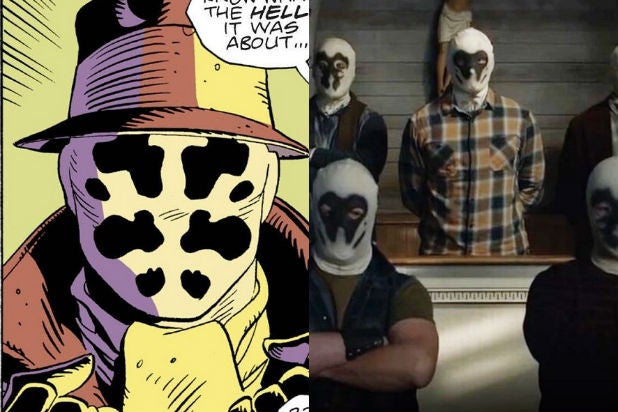 In the graphic novel’s 1985, Rorschach is a wanted fugitive (the government has outlawed masked vigilantes) who hasn’t been caught because no one knows what he looks like, thanks to his unique mask with suspended blobs of black ink that constantly change shape. Alienated and alone, his only outlet is a journal in which he records his bitter thoughts about society, and notes about his investigation of the brutal murder of government-sanctioned ‘hero’ The Comedian.

The investigation reunites him with his old partner, Nite Owl, and after teaming up with fellow ex-heroes Silk Spectre and Doctor Manhattan, the group learns that Adrian Veidt, a former colleague known by the superhero name “Ozymandias,” is behind everything he’s been investigating.

He infected several people with cancer and blamed Doctor Manhattan as part of a successful effort to get the god-like being to leave earth; he murdered The Comedian; he faked an attempt on his own life to throw Rorschach off; he lured Rorschach into a police trap, framed him for murder and got him sent to prison. Most importantly, the giant squid-like creature that materializes in New York City and kills three million people — which the world believes is an attack from another dimension — is a hoax created by Veidt to convince the U.S. and the Soviet Union that they faced a common enemy. 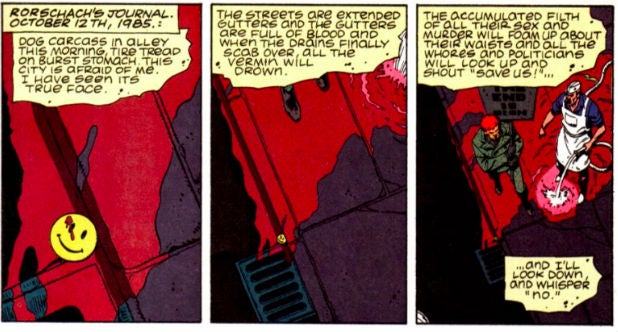 Because the plan worked — the Cold War stops immediately — Manhattan, Nite Owl and Silk Spectre agree to keep quiet and preserve the new world peace. Rorschach, a moral absolutist, forces Doctor Manhattan to kill him in order to keep him from exposing Veidt.

However, prior to all of this Rorschach mailed his journal to a right-wing newspaper, New Frontiersman. At the very end of “Watchmen,” a reporter looking for a story fetched it out of a submission bin, though whether or not the journal was published is left ambiguous.

In the HBO series, it would seem the journal was in fact published because Rorschach has inspired a cult following: the White Supremacist Group known as The Seventh Calvary, whose members were masks that resemble Rorschach’s. In the first episode, a 7th Cavalry propaganda video features a speech promising that “soon all the whores and race traitors will shout ‘save us,’ and we will whisper ‘no.'”

That’s a variation of what Rorschach writes in the journal during his first scene in the comics: “The streets are extended gutters and the gutters are full of blood and when the drains finally scab over, all the vermin will drown.  The accumulated filth of all their sex and murder will foam up about their waists and all the whores and politicians will look up and shout “Save us!” …and I’ll look down, and whisper ‘no.'” 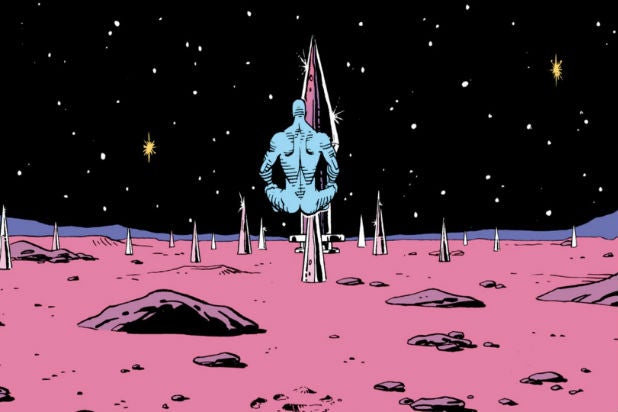 After he was framed for giving people cancer, Doctor Manhattan left Earth to live on Mars, before returning to Earth at the end (see the above entry). After killing Rorschach, he has a final conversation with Veidt, saying that “human affairs cannot be my concern,” because he is “leaving this galaxy for one less complicated.”

But early in episode one of the HBO series, a breaking news hit reports that Doctor Manhattan has returned to his “home” on Mars.

This is more of a thematic tie-in, but when Angela Abar (Regina King) is making eggs for her daughter’s class, they’re arranged briefly to form a smile. It’s a possible reference to yellow smiley face badge (AKA The Button) worn by The Comedian, a major recurring symbol throughout “Watchmen.” 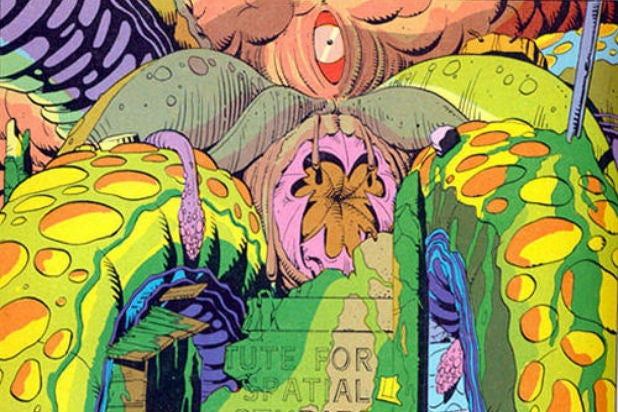 Remember that squid attack we mentioned above? It’s referenced twice in the premiere episode, both directly and indirectly. First, when Angela is driving her daughter home from school, it starts raining squids (really), an event implied to be very common. Later in the episode, the police interrogation officer who goes by “Looking Glass” asks a suspected member of the Seventh Calvary if he believes that “the trans-dimensional attacks are hoaxes staged by the U.S. government.” 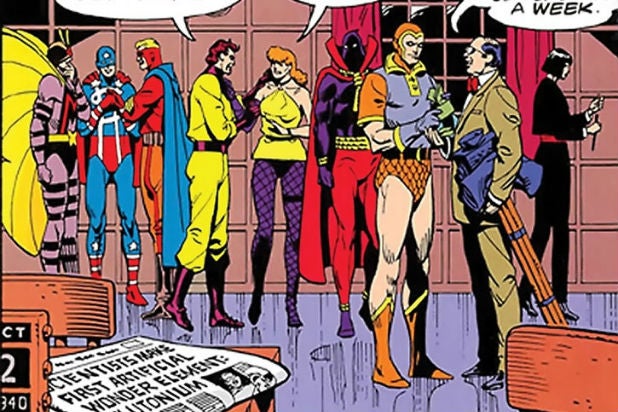 In the original “Watchmen,” there were two separate eras of costumed vigilantes, each with its own Avengers-style team. In the 1960s, the main “Watchmen” vigilantes briefly teamed up as “The Crimebusters,” an effort inspired by the first generation of masked heroes who joined forces as The Minutemen during the 1940s.

Probably as a commentary on our current love of all things superheroes, it appears that in the world of HBO’s “Watchmen,” they have that same affinity. A “television event” centered around the story of The Minutemen is referenced frequently in the episode.

A newspaper in one shot features the headline: “Veidt Officially Declared Dead.” But Jeremy Irons (though not officially confirmed yet) is in fact playing an older version of Veidt. We see him living in some kind of remote mansion, so did it somehow get out that he orchestrated the fake squid attack?

Also Read: 'The Outsider' Teaser: Jason Bateman's Terry Might Be a Murderer (Video) 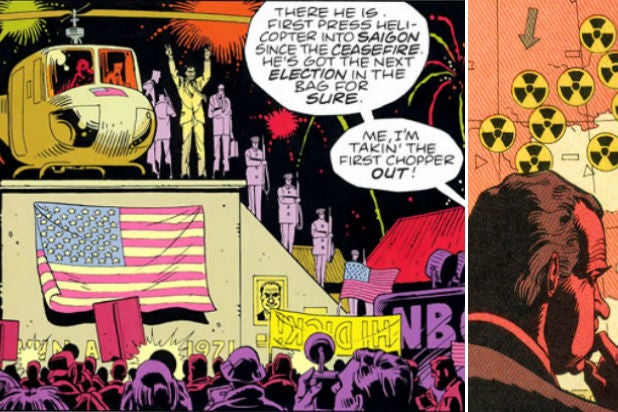 In the comic, we learn that having costumed vigilantes as national assets worked out really well for American imperialism. With Doctor Manhattan (the only character with actual superpowers) aiding military forces, the U.S. won the Vietnam War in 1971. In 1973, The Comedian murdered Woodward and Bernstein to prevent the Watergate scandal from being exposed. Soon after, Nixon leveraged his popularity to repeal the 22nd amendment and by 1985, when the main story takes place, Tricky Dick is in his 5th term of office and Vietnam has just been made the 51st state. Nixon remains popular, but after Veidt’s scheme to end the cold war works, it’s suggested that Robert Redford might run for president (presumably as a Democrat).

In the TV series, Vietnam is indeed a state (Regina King’s character, Angela Abar, grew up there) and Robert Redford has been president since 1992, surpassing Nixon’s lengthy stay (one of his big achievements was enacting slavery reparations, which racists dismissively refer to as “Redfordations”). But in a quick moment when Looking Glass (Tim Blake Nelson) interrogates a 7th Cavalry member, one of the images on the giant circular screens shows off Mount Rushmore, with Nixon’s face instead of President Lincoln.

Nite Owl’s choice of transportation in “Watchmen,” the Owlship, nicknamed “Archimedes” after Merlin’s pet owl, is a large, capsular aircraft with two huge windows in front of the cockpit (ya know, so it looks like a big owl). It — or a separate vehicle modeled directly on it — makes a brief appearance as the apparent property of the Tulsa police dept. Chief Judd Crawford (Don Johnson) and another police officer use it to shoot down one of the Seventh Calvary’s airplanes, before it crashes into a field. 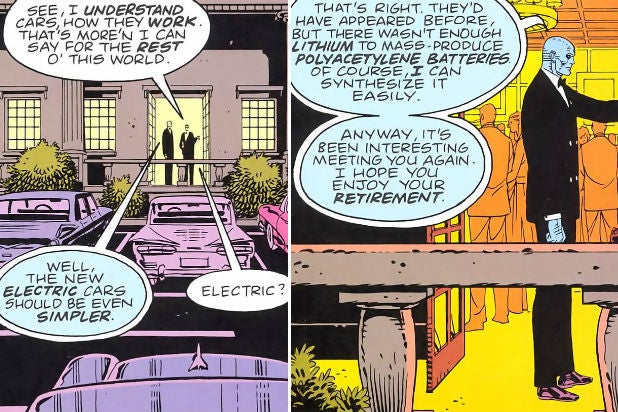 A major theme of the “Watchmen” graphic novel is the way society was profoundly changed by the existence of costumed vigilantes — especially by the existence of Doctor Manhattan, the only true superhero whose power, essentially, is the ability to manipulate matter at the subatomic level and remake it into anything he wants.

In a scene from the comic, set during the 1960s, we get a glimpse of that when Doctor Manhattan speaks to Hollis Mason, one of the original Minutemen who has decided to retire. As an early sign of his eventual disconnect from humanity, Manhattan casually explains that Mason’s plan to open a garage isn’t the sure retirement bet Mason thought, because internal combustion engines are about to become obsolete. That’s because Manhattan is able to synthesize enough lithium to make electric cars a realistic option. Sure enough, by 1985 electric cars are everywhere, and old-style gasoline-powered vehicles are driven mainly by enthusiasts.

That remains the case on the HBO series: every single vehicle we see is electric, even the giant pickup truck driven by a redneck member of the 7th Cavalry.

Irons’ character tells his two servants that he has written a play titled “The Watchmaker’s Son.” Any “Watchmen” comic reader would know that’s a reference to Jon Osterman, the real name of Doctor Manhattan before he was transformed into the god-like blue being. It’s also another obvious clue that Irons is playing Veidt, since the two were longtime comrades.

Multiple references to a ticking clock (usually with the phrase “tick tock”) are strewn throughout the episode. It’s both used to further the plot of Lindelof’s story, but its also a coded allusion to the Doomsday Clock symbol that was prevalent during the 1980s. It was meant to be a metaphor for threats to humanity from unchecked scientific and technical advances. In the 1980s, it was meant to signify the threat of a nuclear war between the U.S. and Soviet Union.

Like the yellow smiley face, the Doomsday Clock was a major theme throughout the original “Watchmen” miniseries, and was featured on the original cover of the final issue. 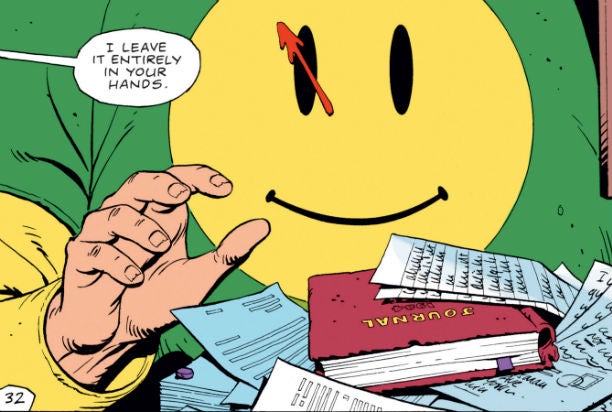 The very last scene in the premiere episode features one of Lindelof’s most overt, if purely thematic, callback to the original “Watchmen.” After Angela finds Judd hanging dead from a tree, the camera pans down to his badge that’s sitting on the ground below him. A small drop of blood hits it. This is meant to evoke the same way a drop of blood fell on The Comedian’s smiley face badge after he was murdered at the beginning of the Moore’s story. The yellow smiley face with a drop of blood on it is one of “Watchmen’s” most well known images, and is on the cover of the first issue.