(Warning: The following story contains spoilers from Episode 8 on “Watchmen entitled “A God Walks Into a Bar”)

TheWrap spoke with Abdul-Mateen about how long he had to carry the secret of who Cal really was, and probably the two biggest questions that viewers had: Why did Dr. Manhattan come back to Earth, and why did he not seek out his former lover, Laurie Blake (Jean Smart)?

“He was just not satisfied,” Abdul-Mateen explains. “He attempted to create new life and to create a utopia but they treated him like a god. The story that’s kind of repeating throughout history is the theme where the god wants to be a human, and the human wants to be a god… [Dr. Manhattan] wanted to feel human again.” That “utopia” that Manhattan created is the same place where Jeremy Irons’ Adrian Veidt has spent the past decade.

As for why he immediately sat down at a bar in Vietnam across Angela instead of finding Blake, Abdul-Mateen said that, since Dr. Manhattan perceives time as all happening at once, he knows that his future is with Angela. “He doesn’t go to Laurie, because that’s not what he does. That’s not what he does in the future. He’s a guy who doesn’t try to alter events of the future. He’s simultaneously experiencing it,” he explains. “She was always the choice. She was always his destiny…I guess that’s kind of cold to Laurie. But that’s one of the tragic things about falling in love with someone like Dr. Manhattan.”

The episode also shows why Manhattan has looked like an African-America man who supposedly didn’t know who he was, thanks to a visit to his old friend Adrien Veidt (Jeremy Irons). We also learned that the two clones were crafted out of a couple that Manhattan knew as a child, and just why he sent Veidt there.

Abdul-Mateen said he didn’t know he was going to be Dr. Manhattan until a few episodes in.

“I went through a couple episodes, actually, without the knowledge of where Cal was going. I knew that he had a mysterious background,” he said. “I didn’t how that would play out until a couple episodes in, I had a conversation with Damon [Lindelof] to flesh that out, and he said very matter of factly Cal is Dr. Manhattan. On the outside I kind of received that cool, calm and collected, but on the inside, man, I was going nuts.” 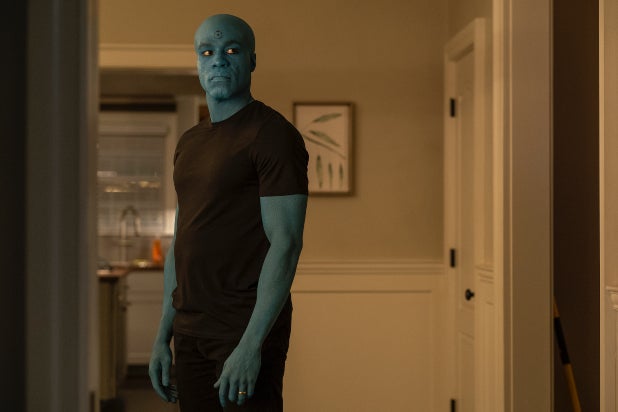 Once he found out, he said that he tried not to alter his performance too much. “I didn’t want to get in the way with what I had been doing with Cal. I didn’t want to tip anyone off,” he said. “My thing was that Angela needed Cal. She needed Cal to be Cal. She needed to be a husband, she didn’t need him to be anything supernatural, until she did. I wanted to make sure that when Cal went away, that there was an attachment to him. That there was a cost to trading off Cal for Dr. Manhattan.”

There is a scene in an earlier episode when Cal is telling their kids about Judd Crawford’s (Don Johnson) death, and he’s surprisingly detached about it, even parroting a famous Dr. Manhattan quote about how a live body and a dead body contain the same number of particles.

“I don’t think it was written, on first view, to guide the viewers to that conclusion. I think that it was written so that, on second viewing,  one would be able to appreciate those sort of breadcrumbs,” Abdul-Mateen explained. “The universe of watchmen is one where you can do a lot of damage by sheltering people from the truth. To me, in that moment, it was really a representation of the danger of their world. The kids couldn’t afford to live in a fairytale.”

And in case you’re wondering, it took about three hours for Abdul-Mateen to get into the blue makeup. “It was definitely one of the longest makeup processes that I had to sit through. It was really exciting at first, but the novelty of it wore off really fast. There were several days when I went home with blue legs and feet.”