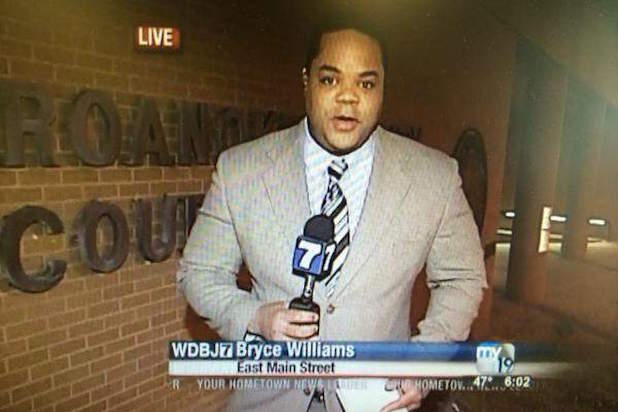 Someone using the name of the suspect in Wednesday morning’s WDBJ TV news shooting sent a 23-page fax to ABC News the night before the incident, which the network turned over to authorities.

“Sometime between Tuesday night and this morning, ABC News received a fax from someone claiming to be Bryce Williams,” the network reported. “It is a lengthy document: 23 pages. ABC News has turned it over to authorities.”

In the fax Williams hinted at his plans and their motivation. “What sent me over the top was the church shooting,” read the fax. “And my hollow point bullets have the victims’ initials on them.”

The fax refers to the racially-motivated shooting in June of a church in Charleston, South Carolina. The gunman in that incident, Dylann Roof, later admitted his motivation was “to start a race war,” to which Williams allegedly responded in his fax, “You want a race war (deleted)? BRING IT THEN YOU WHITE … (deleted)!!!”

“I’ve been a human powder keg for a while,” Williams wrote, “just waiting to go BOOM!!!!”

Elsewhere in the fax is quoted the perpetrator of the 2007 Virginia Tech massacre, Seung Hui Cho, saying, “That’s my boy right there. He got NEARLY double the amount that Eric Harris and Dylann Klebold got,” referring to the gunmen in the 1999 shooting of Colorado’s Columbine High School.

It’s not known whether authorities have authenticated that the fax was in fact sent by the gunman in Wednesday’s killings.

Williams, one-time reporter himself for WDBJ, is the name the alleged shooter, real name Vester Flanagan, used professionally. Flanagan is believed to have filmed himself shooting reporter Alison Parker, 24, and cameraman Adam Ward, 27. The video, along with assorted rants in which Flanagan aired his grievances with the journalists, were posted to his Twitter and Facebook accounts, though police are unable to confirm his involvement with the video at this time. His tweets included:

“EEOC report filed. They hired her after that?”

“Adam went to HR on me after working with me one time!!!”

Station general manager Jeffrey Marks acknowledged Flanagan filed a complaint against Parker, but it was dismissed after station employees failed to back up his claims of racial discrimination.

There have been conflicting media reports as to whether Flanagan successfully killed himself Wednesday morning. CNN is now reporting he shot himself and is in critical condition.

ABC News declined to respond to TheWrap‘s request for comment.