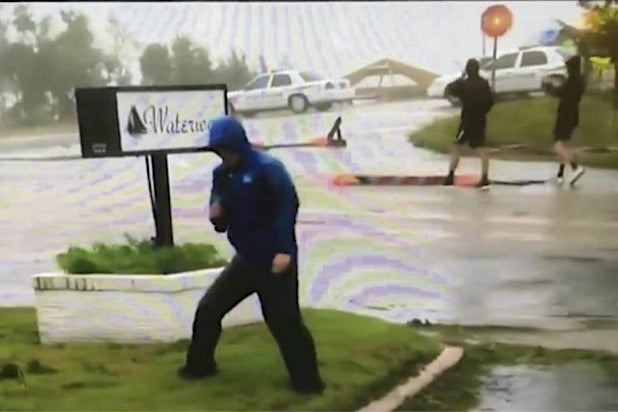 The Weather Channel released a statement in defense of a reporter who was accused of faking the strength of Hurricane Florence’s winds in a clip that went viral Friday.

The clip took place on Friday afternoon, as Hurricane Florence swept over the Carolinas with sustained wind speeds of 75 miles per hour. Weather Channel reporter Mike Seidel could be seen with his knees bent and spread apart, looking like he was struggling to remain standing against the wind.

So dramatic! Dude from the weather channel bracing for his life, as 2 dudes just stroll past. #HurricaneFlorence pic.twitter.com/8FRyM4NLbL

But as the camera zoomed out, it inadvertently caught two other people walking casually in the background, able to stay upright without much effort. The clip quickly became a joke on Twitter, with tweets accusing Seidel of exaggerating for dramatic effect.

Stupidly harmless, I guess, until you think about it. They are purposely trying to deceive their viewers into thinking the storm is worse than it is. Pretty disrespectful stuff from the Weather Channel.

Oh….he was so brave! That grass must have been tremendously slippery and tremendously wet! *snicker pic.twitter.com/etDyrj9TFW

In a statement sent to The Washington Post, The Weather Channel said there were other factors that explained why Seidel was struggling to stay up.

“It’s important to note that the two individuals in the background are walking on concrete, and Mike Seidel is trying to maintain his footing on wet grass, after reporting on-air until 1:00 a.m. ET this morning and is undoubtedly exhausted,” the statement read.

Hurricane Florence was downgraded to a tropical storm late Friday night, though it is still battering the Carolinas with storm surge and rainfall in some areas of up to 30 inches. Seven people have been killed during the storm, with over 1 million residents losing power.