Yahoo and Latimes.com, which many sources relied on to break continuing news about Michael Jackson, both set records on Thursday — the day Jackson died.

Yahoo eclipsed its previous mark for unique visitors, which happened on the day of the 2008 Presidential election.

The Los Angeles Times also broke a record dating back to the election — most page views in a day.

Meanwhile, its coverage of Jackson netted E Online almost as many unique visitors in a week as it had done in the previous month.

With every update related to Jackson making headlines, records are expected to have continued shattering over the weekend (weekend Web metrics aren’t available yet). 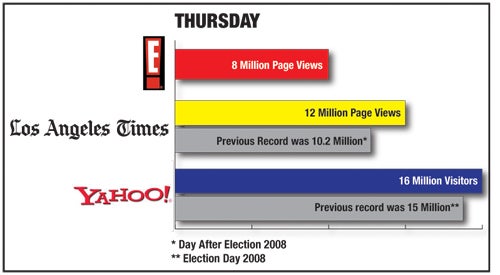 While Jackson’s death has helped Web sites break online traffic records set during the 2008 presidential election, it had no such effect on television ratings, a sampling indicates.

CNN, which traditionally trails Fox News Channel in the ratings, has become the go-to channel for viewers who want Jackson coverage, much as it was during the election.

However, it attracted only a third as many viewers on Thursday as it did on Election Day.

Fox News Channel and MSNBC have also seen only mild bumps over their normal totals.