It’s no longer a question of if “Avatar” will set a worldwide box-office record but when. 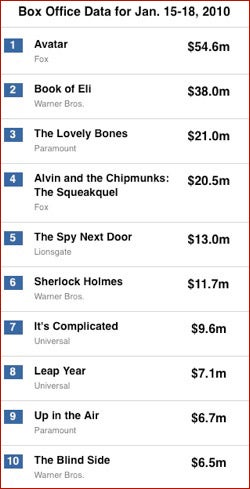 With the $166.3 million in foreign ticket sales reported for the Friday-though-Sunday period, the Fox 3D release is on pace to surpass “Titanic’s” $1.84 billion global record before the end of January, one box-office analyst told TheWrap.

Dropping less than 20 percent from the week prior in North America, the analyst predicts “Avatar” will ultimately gross nearly $2.5 billion globally before it’s done playing in theaters.

Paramount’s “The Lovely Bones” — which was expanded from three to 2,563 locations Friday — finished third at the domestic box office, pulling in $21 million over the four-day period.

And as if releasing a record-breaking global phenomenon wasn’t enough, Fox saw its “Alvin and the Chipmunks” sequel drop marginally in week four, adding another $15 million over the four-day holiday weekend and upping its cumulative total to $196 million.

Fellow Christmas-week releases “Sherlock Holmes” and “It’s Complicated” also held up well, despite both losing a significant number of screens this past weekend. Warner’s “Holmes” finished in sixth place, adding $11.7 million to a four-week domestic total that now stands at $181.2 million.

Not holding up nearly as well in week two was Lionsgate Ethan Hawke vampire movie “Daybreakers,” which dropped more than 60 percent and finished out of the top 10 with $5.6 million for the four-day. 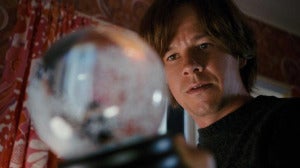 At its current pace, “Avatar” will pass “Titanic’s” domestic record of $600 million by Feb. 6, factoring in weekly drops of about 20 percent. Analysts also predict the film will break “Titanic’s” foreign mark of $1.2 billion next weekend.

With Fox paying 15 percent distribution fees on a global gross of nearly $2.5 billion, and factoring in what he describes as negative costs of approximately $350 million, one analyst told TheWrap that “Avatar” will yield a profit of about $875 million for the studio.