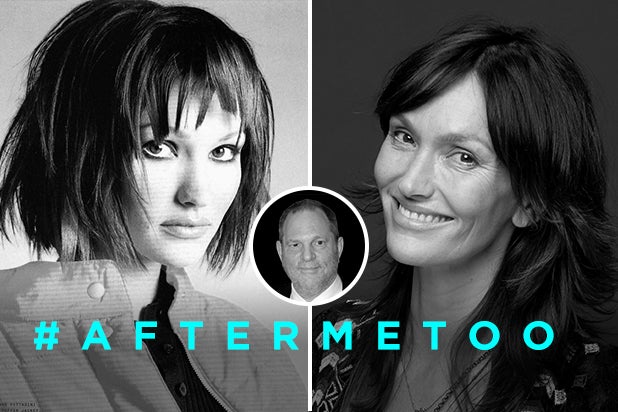 Zoe Brock, one of the first women to accuse Harvey Weinstein of sexual misconduct last October, is “f—ing” livid that the optimism she felt as the #MeToo movement first gained steam has given way to anger and disappointment.

“On an almost on an almost daily basis I have to read about these guys wanting to make comebacks, and it’s like, ‘Just go away already,'” Brock told TheWrap from her home in Melbourne, Australia. “You’ve made your millions, you’ve had your time in the spotlight, go and enjoy your money, be with your family, mend your f—ing relationships and f— off!”

“I would spend every cent [I have] right now to go back in time and travel to New York City and be in that comedy club when Louis C.K. did his little ninja stunt,” she said. “I would have stood up and shouted, ‘F— off! F— off!’ I would have had a f—ing chant going.”

It’s not just about C.K. In a twist worthy of a Shakespearean tragedy, one of the #MeToo movement’s most prominent figures, Italian actress and director Asia Argento, was herself accused of sexually assaulting actor Jimmy Bennett when he was still underage.

At first, Argento denied the accusations, saying the two were “linked” by “friendship only.” But in text messages to a friend, Argento admitted to having sex with Bennett, contrary to her public statement. (Argento has since changed her story, saying it was Bennett who assaulted her.)

“I was in a unique position where I was privy to her admission of guilt from the very beginning [of the story breaking],” Brock said. “It was a truly awful couple of weeks since that news broke.”

Also Read: A Harvey Weinstein Accuser Looks Back From the Eye of a Storm (Guest Blog)

She’s also disturbed that Hollywood figures like Ryan Murphy and Brian DePalma have announced projects related to the #MeToo movement. “It’s disgusting and triggering and violating to have [men] in Hollywood writing films about our stories,” she said. “These are not their stories to tell.”

Brock was one of the first to accuse Weinstein of sexual misconduct in a post on Medium on October 7, 2017. She wrote of being caught alone with him in his room at the Hotel du Cap:

“Harvey left the room, but not for long. He re-emerged naked a couple of minutes later and asked if I would give him a massage. Panicking, in shock, I remember weighing up the options and wondering how much I needed to placate him to keep myself safe. He asked if I would like a massage instead, and for a second I thought this might be a way to give him an inch without him taking a mile.”

She escaped that night, and for many years worked as a model in Europe before having a baby and moving back to her native New Zealand. Since last fall, she has been living in Australia, staying in close touch with fellow survivors via social media.

Brock recently spoke to TheWrap about the aftermath of her public accusation against Weinstein.

How are you?
I sat down to write about how I am and I find it so hard to articulate because every day is different. And so I fluctuate between feeling strong and purposeful [and being] on guard and waiting for the next horrifying thing to happen. I’ve struggled with feeling really terrible.

I’ve had to deal with massive PTSD, anxiety, panic attacks and early onset thyroid issues that are a natural progression of the vast amounts of adrenaline and cortisol that’s been flooding my system… I’m too scared to have faith in the system so I tend to live in the worst case scenario head-space to protect myself from disappointment.

How do you think the #MeToo movement is doing almost a year later?
We saw [Bill] Cosby finally being found guilty, sentencing TBD, that was a huge shining beautiful moment for anyone who’s ever suffered sexual assault, especially from powerful people because we don’t usually see a conviction of these assholes.

Unfortunately, we can’t rewrite history as much as we would like to. It’s a crying shame that the statute of limitation is going to mean that a lot of these people walk. It’s a crying shame that historically victims of sexual violence don’t come forward in the moment when there is actual physical evidence that could be collected and recorded, and so considering those two huge issues we know that a lot of these guys are going to get off unless some of the women and men who were attacked within the statute of limitations speak out and we know they’re out there.

How is morale among #MeToo survivors?
Everyone is licking their wounds and laying low and trying to process so many layers of trauma. Every time we think we’ve gotten over a new arrest or another “alleged” accusation, there is a new one coming and each one is re-traumatizing and I don’t think people understand how visceral the trauma is. It lives in our bodies. Whenever I have to talk about any of this, I’m short of breath.

We’re talking about a whole community of re-traumatized people. You don’t know what it’s like to go online and see story after story of a new person being accused or someone trying to make a comeback and people debating whether they’ve paid their dues. It’s excruciating and maddening.

How would you rate the movement’s progress?
In five years I think we will see massive shifts, I hope. But as of now, very little has changed. We know that there are still men with a history of sexual assault and misogyny working in the entertainment industry that have yet to be exposed.

We know that certain studios have filing cabinets filled with [nondisclosure agreements]. We know if you go through old newspaper articles there are people in the entertainment industry who have a history of sexual assault that have not been taken seriously that still work and have representation.

Has it gotten worse?
It’s certainly gotten weird. It’s extremely disheartening to know that nothing’s being done about it. It’s really triggering to have cases go to the police and not be able to prosecute. It’s horrifying when news stories come out about these men wanting to make comebacks. It’s disgusting and triggering and violating to have [men] in Hollywood writing films about our stories — shout out to Ryan Murphy, Brian de Palma. … These are not their stories to tell.

I started going to therapy and I remember the first therapy sessions. I was dreading having to tell someone about [private spy firm] Black Cube and ex-Mossad agents and all the data on my computer getting taken and preserved for trial and class action suits and celebrities and suicides. It’s insane. I sat there and told [the therapist] all of this and she kind of stared at me.

The Asia Argento story seems to have thrown the movement for a loop. What did you make of it?
I was in a unique position where I was privy to her admission of guilt from the very beginning [of the story breaking]. I was struggling with the people who were saying it’s a conspiracy theory and it’s Harvey [Weinstein] trying to destroy Asia because I knew it wasn’t the case. I knew that she had done it. I remember being kind of incensed by the distraction of how the story came out. I don’t care who leaked it. That’s incendiary. The fact is that it happened and that’s what we need to worry about it.

Some people in the movement have cautioned against comparing Argento to Weinstein, saying that Argento’s abuse was singular, whereas Weinstein was a serial predator who abused women for decades. What do you think?
Bulls—! Bulls—! Bulls—! It is possible to be a victim and to victimize — we see it all the time. We’ve seen it with a bunch of priests. We see it in families. It’s an awful fact that trauma begets trauma and sexual violence can beget other sexual violence. But where I come from it’s a very slippery slope when it becomes a defense for a victimizer.