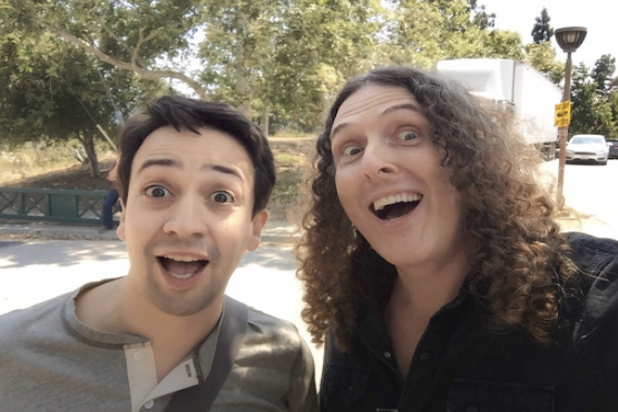 The Hollywood Chamber of Commerce just announced its 2018 Hollywood Walk of Fame honorees, and among the 30+ gold star recipients are musician and parodist, “Weird Al” Yankovic, and “Hamilton” star and playwright, Lin-Manuel Miranda.

Yankovic and Miranda just so happened to be having lunch together when a fan came over to tell them the news. The pair captured the moment in a pair of photos posted to their twitter accounts.

I was hanging out with THIS guy when we both found out. Coincidentally, he’s getting one this year too!! @Lin_Manuel pic.twitter.com/qjwaULfTny

The craziest part of all this was I WAS HAVING LUNCH WITH @alyankovic WHEN SOMEONE TOLD US WE'D BOTH BE GETTING STARS. FOR REAL. pic.twitter.com/z3L8PvYNyW

Not-so coincidentally, Lin-Manuel Miranda is a lifelong fan of Weird Al. Last year, he got to live out what he later described as the “VERY close second” best moment of his life when he joined the “White & Nerdy” singer on the Radio City Music Hall stage to sing “Yoda” (a parody of The Kinks’ song, “Lola”).

That same year, Manuel told Conan O’Brien on TBS’s “Conan” about the first time he met Weird Al and the “no chill” mild fanboy freakout that ensued.

To receive a star on the Hollywood Walk of Fame, an artist or entertainer must be nominated (even fans can submit nominations). The nominated candidate must approve their own nomination to move forward in the process. A selection committee then chooses typically 20 or more recipients among an average pool of 200 nominees.

For Weird Al, receiving his star was a long time coming. According to MTV, fans submitted a nomination bid for him in 2006 that was ultimately denied. A subsequent fan-backed campaign–called “Al’s Star Fund”–raised nearly $25,000 to cover the $40,000 nomination fee. After at least 11 years of effort, the musician finally received his star and got to share his accomplishment with a friend and fellow recipient.