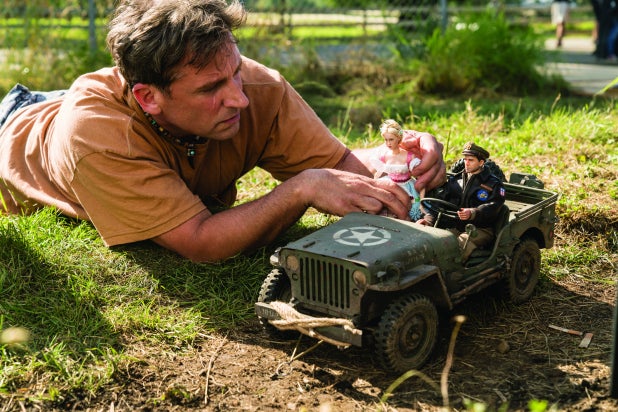 Universal will be relying on “The Grinch” for good box office news this Christmas, as the studio released a second straight bomb in as many weeks with DreamWorks’ “Welcome to Marwen.”

Made on a reported $40 million budget, “Marwen” opened to just $2.4 million from 1,911 screens this weekend, well below tracker projections of a $7-10 million opening. It’s tied with Paramount’s “Action Point” for the worst wide opening from a major studio this year, and it is the worst career wide opening for lead star Steve Carell and director Robert Zemeckis.

The movie is based on the true story of Mark Hogancamp, who was severely beaten by white supremacists and suffered brain damage and amnesia. To help with his recovery, he created a miniature village and populated it with figures representing people in his life, including his attackers. Critics panned the film with a 25 percent Rotten Tomatoes score, and audience reception wasn’t much better with a B- on CinemaScore.

This opening comes a week after Universal released “Mortal Engines,” a film that has only grossed $12 million domestically through 10 days in theaters and $54.2 million worldwide against a budget reported to be at least $100 million.

Combined, the two films stand to lose $150-175 million for Universal and its financing partners, according to box office sources. “Mortal Engines” was co-produced and co-financed with Media Rights Capital, with Universal sharing financing with Legendary. “Welcome to Marwen” was co-financed 50-50 with DreamWorks. Chinese media company Perfect World also financed the film as part of a slate financing deal with Universal.

“The Grinch,” on the other hand, is still going strong for Universal in its seventh weekend, grossing $8.1 million to push its domestic total to $253 million, easily outgrossing fellow November animated release “Ralph Breaks the Internet,” which currently stands at $162 million. Despite a very poor ending, Universal’s 2018 was still good, with a domestic total of $1.71 billion for the year and a 15 percent market share.