Wendi McLendon-Covey, who plays the 1980s uber-mom at the center of ABC’s “The Goldbergs,” broke out in “Bridesmaids,” which earned the cast a SAG nomination and an MTV Movie Award.

Last year, she got a Critics’ Choice nomination for her scene-stealing work on the series. Her hopes for the third season are brighter than Mrs. Goldberg’s neon ’80s makeup.

The Goldbergs is narrated by Patton Oswalt as the grownup Adam F. Goldberg — the show’s creator — looking back on his youth. But it’s not like “The Wonder Years” or “Mad Men,” focused on a particular time.

Our show will never tell you a specific year, because Adam is telling it from memory, and you’re never gonna have total recall. Eighties pop culture is not a joke, but a setup for the story.

But it does remind one of “The Wonder Years.”
“The Goldbergs” will never get that political, though we love that show, and [“Wonder Years” star] Fred Savage directed an episode for us last year. The flavor is very much the same. It’s funny, it’s about growing up, we don’t have a laugh track telling you where the jokes are. And in the third act, you get a lump in your throat.

You got famous playing a rotten mother in “Bridesmaids.” How is Beverly Goldberg different?
My “Bridesmaids” character thought kids were a total inconvenience. Beverly adores her children. All she wants is to be invited to every party, hug ‘em and kiss ‘em and stick her nose right in their ear. “Oh, Schmoopy, give Mama snuggies, you’re the sweetest f—ing children in the world!”

What’s Beverly up to in the third season?
She’s convinced she can help Adam completely avoid puberty. Look, she’s watched two other kids go through “puberting,” she’s an expert. “I know how to help you avoid the whole thing, the awkward phase, so just trust mama.” 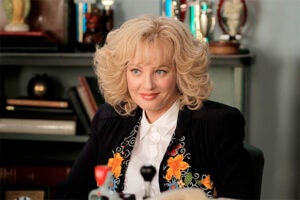 But Beverly once invaded her son’s wrestling match.
Because there’s nothing awkward about wrestling your son to the ground in front of the entire school.

The show references ’80s icons like Lloyd Dobler’s boombox [from “Say Anything”]. What’s coming up?
Every year they do a big homage to a movie from the ’80s. They’ve done “Ferris Bueller” and “Goonies.” I don’t know what the next is, but the first episode will have “Risky Business” undertones. Someone’s having a party when their parents aren’t home. Beverly has to show up and make the party uncool so everybody leaves.

That’s dysfunctional.
I hate it when people say, “Oh, the Goldbergs are dysfunctional.” Honestly, I don’t know any functional families. Everybody’s just trying to raise their kids on instinct. Try to get it right and apologize later. This is before Dr. Phil.

What other signature episodes are coming?
Thanksgiving episodes are kind of going to be our thing. Every season there’s a Thanksgiving show. Judd Hirsch plays Jeff Garlin‘s [Mr. Goldberg’s] dad. Perfect casting. Every year his brother comes with a new pyramid scheme he tries to sucker everyone into.

You met the real Beverly Goldberg. What’s she like?
I play her a lot nicer than she was. Her words, not mine! Believe me, she is legendary. There are stories of her storming down to school to get in a teacher’s face. She’s the CEO of that house, and she takes her job seriously.