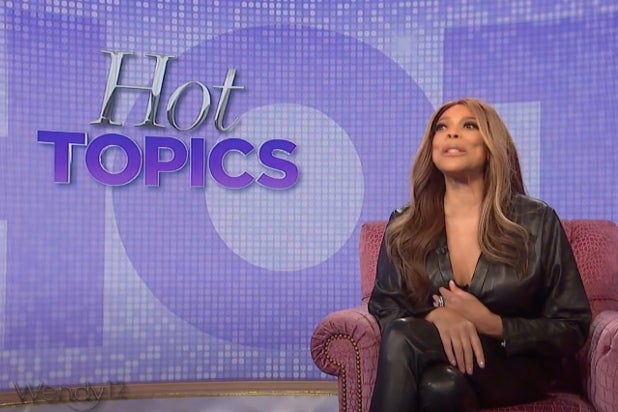 Wendy Williams launched a defensive of her recent odd on-air behavior during Monday’s episode of her talk show, “The Wendy Williams Show.”

“I love entertaining you, you know, and it’s not easy. It’s not easy. You’re a tough crowd,” Williams told viewers.

Several moments from her Oct. 23 episode raised eyebrows, including moments when the host blinked rapidly, trailed off in the middle of sentences and appeared lost.

“I always say I love you for watching because I really, really do,” she said on Monday’s episode. “I come here every day and I try to do the best that I can for you. I appreciate you watching, but even after all of these years, it’s still work and effort put in for the hour that I’m out here with you, you know? I guess every day is not perfect, but I’m not a perfectionist. I’m not perfect.”

In the clip from Friday’s episode, Williams’s strange behavior is evident during the “shoe cam” portion of her Hot Topics segment. Beginning at the 2:20 mark in the video below, Williams slows her speech and trails off in the middle of sentences, smiling and shrugging her shoulders while looking off into the distance.

“The Wendy Williams Show” host took a break from filming in May due to her struggles with Grave’s Disease. She’s stepped away from the show in the past due to her diagnosis, which she announced in 2018. She once fainted on stage during a live taping — an incident she said was due to the autoimmune disease. Williams  resumed filming in September from home.

Williams former DJ Boof responded to a fan on Instagram who said she “needs to get help.”

“Yup exactly and it will all come out..” Boof said. “Y’all have no idea what’s really going on and everyone there is afraid to speak up because they don’t wanna lose their jobs.. this is going to play out bad.. I feel sorry for the workers and victims.”

Watch the clip from Friday’s episode below.