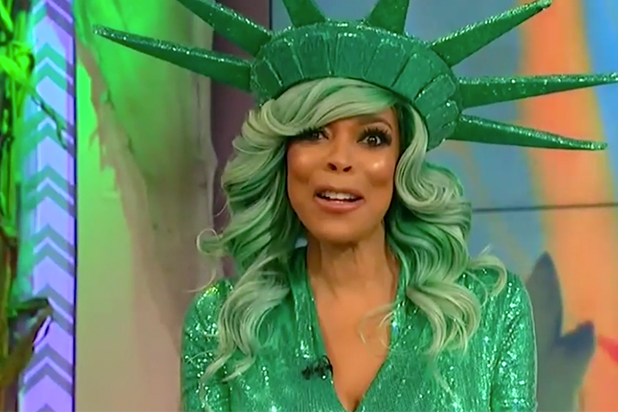 One day after fainting during a live broadcast of her daytime talk show, Wendy Williams teared up while recounting what had happened.

“It was scary,” Williams said during her show on Wednesday, according to People. “It was really scary. It was so scary, all I could think of in the middle of the scare was, ‘Don’t pull the podium over on you, because that’ll make it worse.'”

Williams assured the audience that it was not a joke: “I don’t want to fall. I’m a tall woman, and it’s a long way down. I’m also a woman of a particular age, and I’m not trying to break anything. Also I don’t do stunts and jokes for you like that. I don’t need that.”

Williams explained that she was being briefed by one of her producers during a commercial break 48 minutes into the show when she began to feel “hot and a little dizzy … like something is about to happen.”

“As she was talking to me, all I heard was ‘blah, blah, blah’ and all I’m thinking is, ‘Wendy, oh my gosh,’ ” she recalled. “The crew brought out the clear plexiglass podium that you saw — we were about to do our Halloween costume contest. I was like, ‘All right, Wendy. At least you’re wearing flats and you’re holding onto this and there’s only 12 more minutes of the show. You can do it girl.’ “

“So we come back from the break, I heard nothing that she said,” she said. “I immediately go to the teleprompter … and that’s when you saw me with the eyes.”

The host also explained why she held the back of her head before going down.

“That was because I promised myself two things,” she said. “First of all, this is never going to happen again. Second of all, if it’s going to go down, it’s got to be as cute as I could make it. So I’m going down with the crown, and I’m not pulling this plexiglass podium to break my bones.”

She added, “They told me that I went down on my booty first … rolled onto my back, then, boom — on my head. I have no headache, no lump on my head. At 53 years old, no aching in my body. I am shocked.”

Paramedics informed her backstage that she was low on electrolytes.

“My blood pressure was fine, my heart rate was fine, everything was fine,” she said. “I’m a 53-year-old middle-aged woman going through what middle-aged women go through, if you know what I mean. The costume got hot. Right before passing out, I felt like I was in the middle of a campfire.”

7 Stars Wendy Williams Has Bashed: From Beyonce to Tupac (Photos)

Wendy Williams gained notoriety for being outspoken. Although that may be a good quality for a talk host, it can also get her into a little bit of trouble.

TheWrap looks at seven of the celebrities the daytime talk show host has feuded with.