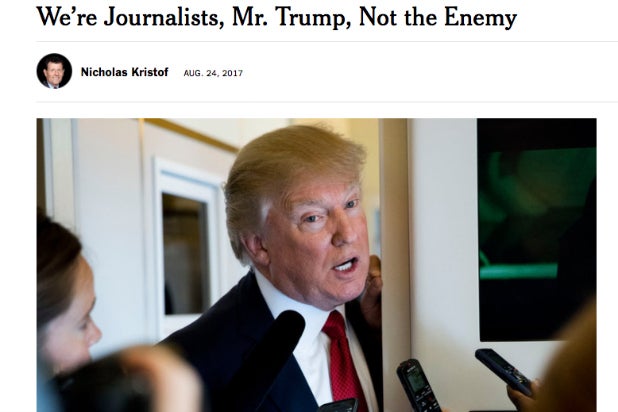 “Sad when they now have to convince people of that,” one commenter tweeted. While another snarked: “really bad comedians at best.”

Here’s Kristof’s lede, or what “we journalists” call an article’s opening paragraph: “Sigh. If only President Trump denounced neo-Nazis as passionately and sincerely as he castigates journalists.”

Many conservatives probably stopped reading right there, instead Command+Tab-ing over to TweetDeck to express their displeasure.

Also Read: New York Times on Why It Printed Scaramucci's Profanity: 'It Was Newsworthy'

Of course, anyone who did that would have missed much of Kristof’s substance, which included some self-deprecation. Here are Kristof’s next two grafs — shorthand “we journalists” use for “paragraphs.”

What could be an easier task than distancing oneself from Nazis or violent white supremacists? Yet Trump manages to make it infinitely complicated — and then get distracted by self-pity and excoriate reporters for committing journalism. The key strain of his sulfurous speech in Phoenix on Tuesday was an extended attack on “dishonest” reporters (including at “the failing New York Times”).

Look, we in journalism deserve to have our feet held to the fire. We make mistakes all the time, and too often we are superficial, sensationalist, unfair, defensive or diverted by shiny objects. Critics are right that we in the national media are often out of touch with working-class America, and distressingly often, we are lap dogs instead of watchdogs.

Trump supporters probably also didn’t like it when Kristof went on to suggest POTUS “has always had a soft spot for racists” and is “simply a thin-skinned narcissist who shares the white supremacists’ sense of victimization.”

We’re not going to post Kristof’s entire column, because “we’re journalists” too, and that’s not cool in this line of work. But we’ll link to it again — click here to see what all of the hubbub is about.

To be fair to Kristof, there were some tweets in support of his headline and overall premise — they were just hard to find among the ugliness. That’s social media for ya.

Hey, here’s one! Aside from originally tweeting his column and an obituary for former colleague Jack Rosenthal, a retweet of MSNBC political analyst and former Obama administration member Richard Stengel’s kind words for “We’re Journalists” has been Kristof’s only Twitter activity today. It’s probably for the best that he stay off the platform through the weekend.

Smart @NickKristof column on why journalism is an indispensable constraint on power. And now more than ever. https://t.co/S42MGe0AjN

We're Journalists NO U R manipulating the truth 4 ur bias."We the people" give U the right FREEDOM OF THE PRESS & U used it against us!

This is how we give unbiased reporting because, ya know, We're Journalists https://t.co/ASP7Z2q1tT

"We're Journalists" -NYTimes Sad when they now have to convince people of that just like "reliable sources" on CNN. Sad!

I am SO SICK & TIRED of your opinions "We're Journalists"! Opinions are like noses, EVERYONE has one. Grow up & report the news!

We're Journalists! We just look like a room full of dummies… pic.twitter.com/MQj1FOuO6O

Lie [lahy]
a false statement made with deliberate intent to deceive; an intentional untruth; a falsehood. #FakeNews

"We're Journalists"
I disagree
Gossip, guesses, and lies become facts….that's just idiocy anyone can do.