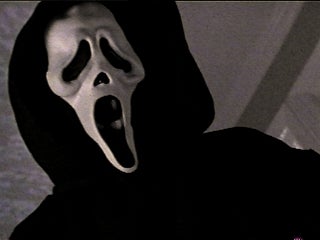 I thought this day would never come.

Neve Campbell, David Arquette and Courteney Cox Arquette will all reprise their roles along with a contingent of younger actors. (Let the speculation begin!)

I spoke to "Scream" star Matthew Lillard several weeks ago who told me he hadn’t been approached about the latest sequel, but expect Craven to have some surprises in store for the die-hard fans like myself. Though his character was killed at the end of the original, Lillard made a cameo in "Scream 2," appearing in the background at a frat party.

Curiously missing from the Variety story is the fact that screenwriter Kevin Williamson will return to write the sequel, much to my delight. Williamson wrote the first two installments of the trilogy, while Ehren Kruger wrote "Scream 3."

Oscar-nominated "Hurt Locker" composer Marco Beltrami provided the music for all the "Scream" movies, so here’s hoping he returns to his genre roots for "Scream 4."

My own history with the "Scream" series dates back to middle school. I grew up a horror buff with a voracious appetite for issues of Entertainment Weekly and Premiere. When I was 12 years-old, I went to see "Scream" on opening weekend. My mother had to buy the ticket for me because it was rated R. I remember the theater being fairly empty. In the opening reel, when Ghostface asked Drew Barrymore who the killer was in "Friday the 13th," I screamed "Jason!" right along with her. Of course, Mrs. Voorhees was the killer in the original "Friday the 13th," so if I were Barrymore, I would’ve gotten my football-playing boyfriend killed too. That’s when I knew that the movie was much smarter than I had prepared to give it credit for. By the time Neve Campbell put one last bullet in Skeet Ulrich’s forehead, I was hooked.

I went back the next week with a mini tape recorder and actually recorded Kevin Williamson’s dialogue, recognizing its inherent brilliance even as a 12 year-old. Six months later, everyone at my school had seen it and I threw a party celebrating its VHS release in June. I still have my "Scream" and "Scream 2" posters hanging on my childhood bedroom wall, as well as another "Scream" poster in my man-child apartment. I’ve seen the unrated Director’s Cut that used to run on Starz back in the day, featuring more gore. I have the Ghostface mask, two worn and tattered t-shirts (including one that glowed in the dark!) and just in case I needed to make an important call, I carried a "Scream" phone card in my wallet. You will not find a bigger "Scream" fan than I, outside of maybe Neve Campbell’s agent.

It’s been ten long years since "Scream 3" sliced its way through theaters en route to a $160 million worldwide haul. That was about $10 million less than its two predecessors earned, though by that point, it’s fair to assume franchise fatigue had set in. "Scream 4" starts shooting this spring and promises to carve up the box office again when it opens April 15, 2011.

Craven, who directed a forgettable segment of the 2006 anthology film "Paris, je t’aime" and hasn’t directed a feature film since the sleeper hit "Red Eye" made stars out of Rachel McAdams and Cillian Murphy in 2005, has "My Soul to Take" (formerly "25/8") opening later this year.

According to IMDB, the horror film concerns "a serial killer who returns to his hometown to stalk seven children who share the same birthday as the date he was allegedly put to rest" and stars Shareeka Epps (so devastating in "Half Nelson"), Denzel Whitaker ("The Great Debaters") and Max Thieriot ("Jumper").

"Scream 4" producers Bob and Harvey Weinstein are going back to the genre well in 2011, with Alexandre Aja’s "Piranha 3D" swimming into theaters August 27.