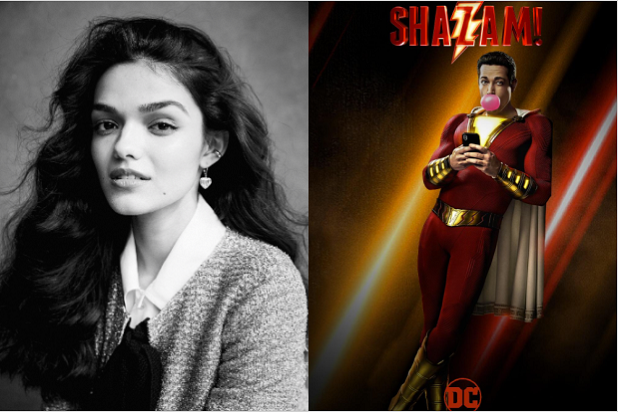 Rachel Zegler, who plays Maria in Steven Spielberg’s upcoming musical “West Side Story,” has joined the cast of “Shazam: Fury of the Gods” for DC and New Line, TheWrap has learned exclusively.

Zegler will play a key role with details being kept under wraps. Zegler also becomes the second Colombian American to be cast in a DC superhero project, following Sasha Calle joining the cast of “The Flash” in the role of Supergirl.

“Shazam: Fury of the Gods” is a highly anticipated sequel to New Line and DC Comics’ 2019 film “Shazam!” It will continue the story of teenage Billy Batson who, upon reciting the magic word “Shazam!” is struck by the Living Lightning of the gods and transformed into his adult superhero alter ego, Shazam.

Zachary Levi will reprise his role as the kid-at-heart superhero who is bestowed with the powers of six gods: the wisdom of Solomon, the strength of Hercules, the stamina of Atlas, the power of Zeus, the courage of Achilles and the speed of Mercury. While Shazam is a formidable champion, Billy Batson is still just a fun-loving kid trying to navigate high school while learning how to use these powers.

David F. Sandberg is returning to direct the sequel from a screenplay by Henry Gayden. Peter Safran is producing through The Safran Company alongside Geoff Johns of Mad Ghost Productions. “Shazam” is based on the DC character created by Bill Parker and C.C. Beck.

“Shazam!” was the No. 1 film worldwide on its opening weekend in 2019, going on earn over $366 million worldwide on a relatively modest budget for a superhero film. The film, which starred Asher Angel as the teenage Billy and Jack Dylan Grazer as his sidekick, earned an ‘A’ CinemaScore with audiences and a stellar 90% certified fresh Rotten Tomatoes score.

Also Read: Zachary Levi to Star in Live-Action 'Harold and the Purple Crayon' at Sony

Rachel Zegler is a singer and songwriter, raised in New Jersey by her American father and Colombian mother. She was one of 30,000 to audition to play Maria in Spielberg’s remake of the classic “West Side Story,” and stars opposite Ansel Elgort as Tony. She first played the role in a Performing Arts School presentation at Bergen Performing Arts Center. Zegler will star alongside Rita Moreno, who won an Oscar as Anita in the original film version of “West Side Story,” as well as Tony winner David Alvarez, Tony nominee Ariana DeBose and Josh Andres Rivera as Chino.

Zegler has a whole YouTube channel featuring covers of pop songs and Broadway standards, including her own rendition on “Shallow,” Lady Gaga and Bradley Cooper’s internet-breaking duet from “A Star Is Born.” In fact, a brief video of her singing the song in front of an empty auditorium went viral on Twitter with over 11.5 million views.

Zegler has also previously shared videos of herself performing as Maria in a 2017 high school production of “West Side Story,” including her final monologue and a video titled “West Side Story in Five Minutes.“

Zegler is repped by ICM Partners.

For the record: A previous version of this story misspelled “West Side Story.”