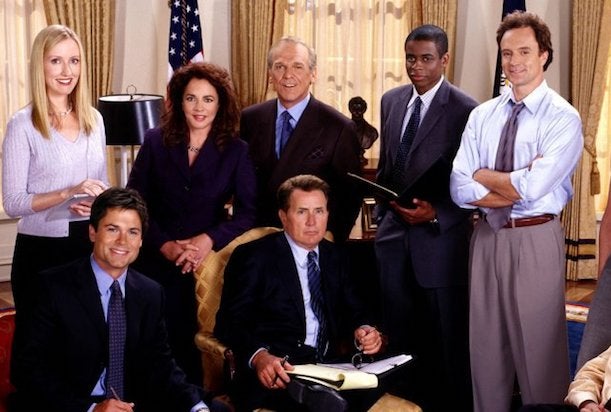 Well, it looks like that long-buzzed about “West Wing” reboot might actually be in the works after all.

On Wednesday, the NBC political drama’s stars Bradley Whitford (Josh), Janel Moloney (Donna), and Joshua Malina (Will) had dinner with creator Aaron Sorkin, and Malina — now unemployed, thanks to the recent end of ABC’s “Scandal” — stoked the flames of a reunion by tweeting a photo of the evening with the caption, “Talking reboot.”

I’m having dinner with @JoshMalina. He took my phone and tweeted that last tweet. It was not me. I swear to God. Forgive him. @kumailn

But if they are talking about a revival, they are missing one key member of the new cast: Sterling K. Brown.

Last fall, Sorkin told The Hollywood Reporter his idea for a possible reboot of the series — for which he says he has a “standing offer” from NBC — saw the “This Is Us” star in the Oval Office and “some kind of jam” brings Sheen’s Josiah Bartlet in to advise Brown’s POTUS “in the way that Bill Clinton used to consult with Nixon.” Brown tweeted soon after that he would be “honored” to lead that project.

And while Sheen isn’t familiar with the Emmy-winning actor’s performance, he told TheWrap in March he has full faith in Sorkin’s selection.

“I have heard of him, but I have not seen the show, so I couldn’t speak to his talent,” Sheen told TheWrap. “But if Aaron were to choose him, I would have 100 percent confidence in him.”

NBC did not immediately respond to TheWrap’s request for comment about on the status of a possible reboot.

See Malina’s picture of the “West Wing” reunion below.