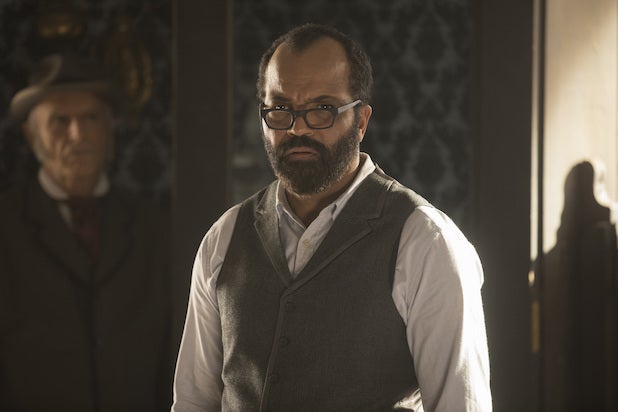 (Spoiler alert: Please do not read ahead unless you’ve seen Sunday’s episode of Season 2 of “Westworld,” “Vanishing Point.”)

Bernard Lowe has finally cut Robert Ford out of his life — literally.

Toward the end of Sunday’s episode of “Westworld,” Jeffrey Wright’s character reached a breaking point with his old partner and friend. The head of the park’s programming division — and a Host himself — has been living with the late Robert Ford (Anthony Hopkins) “inside” his brain for the better part of 2 installments, but he decided enough was enough when Westworld’s creator tried to get him to kill Elsie (Shannon Woodward) — again.

Also Read: 'Westworld': Someone Either Screwed Up the Last Episode or Dropped a Huge Easter Egg

TheWrap spoke with Wright ahead of the episode, which was Season 2’s penultimate, to figure out how Bernard was finally able to break his unhealthy bond with Ford, and where things are headed in next week’s finale.

First off, Wright’s pretty happy Ford was unsuccessful in his second attempt (that we know of) to get Bernard to murder Elsie, who Ford insists is going to betray Bernard on their way to secure the Forge. (That’s the storage facility for all the data the park has been mining from its guests’ brains, which Evan Rachel Wood’s Dolores is also gunning to capture. Or destroy — unclear right now.)

Instead, in a very-unlike-himself manner, Bernard screams “get out of my f–king head” at Ford’s consciousness, cuts a hole in his own arm, plugs himself in and starts to use a control tablet to “delete” Ford. Bernard insists to his imaginary friend that he can stop Dolores all on his own and Ford says, actually, Bernard’s the “only one who can,” then suddenly disappears. (Though it’s not entirely clear whether it was Ford, or Bernard, that deleted the “data package” containing Ford’s consciousness from Bernard’s system.) Then Bernard drives off toward the Forge, leaving Elsie annoyed — but safe — behind him.

But while we may not know yet if it was Bernard who deleted Ford, Wright says it’s safe to say Bernard was the one who decided to kick Ford out.

“I think part of that decision was born out of Bernard exercising choice,” Wright said. “And so Bernard is quietly and consistently emerging now, and he is thrusting himself into the middle of things. And, likewise, the rest of the world is heading in that direction too. So he’s driving toward his self-determined fate.”

And Wright is “100 percent” thrilled with Bernard’s decision.

“Absolutely. That’s Bernard’s version of an awakening,” he said. “He’s been a little slow out of the gate relative to the other [hosts], but his desire for freedom runs through Ford. So that’s part of the unresolved business that needed to be sorted out. That was absolutely necessary to where he needed to be headed, so we’ll see where he ends up with it.”

Speaking of where he ends up, was Wright content with where we leave Bernard at the end of Season 2 — and will you, the viewer, be as well, seeing as we don’t know when Season 3 is coming?

The Season 2 finale of “Westworld” airs next Sunday at 9/8 c on HBO.