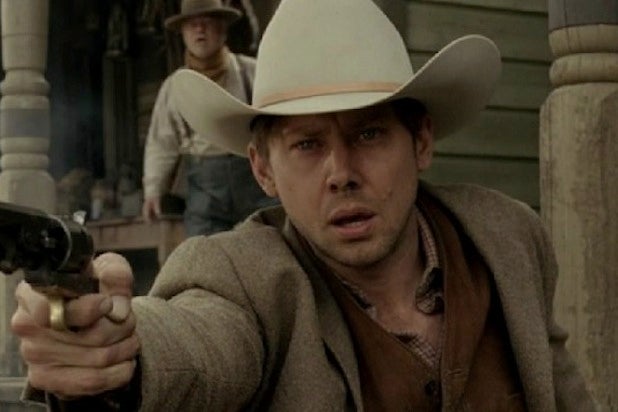 From the moment it starts, “Westworld” flings viewers into a world of hedonistic fantasies and questionable morals. The one-percent of the show’s futuristic society pay $40K a day to dress up like cowboys and play in the most realistic Frontierland ever created by man. And that “play” seems to mostly involve sex and six-shooters with androids programmed to perform specific roles. It’s “Red Dead Redemption,” but with that game’s thought-provoking story replaced with the most lurid elements of “Grand Theft Auto.”

But not every guest comes with the intent to indulge in their darkest impulses. One of them is William, a timid newcomer to Westworld played by Jimmi Simpson. Simpson is most well known for playing the hacktivist Gavin Orsay in “House of Cards” as well as skeevy individuals like the obnoxious Lloyd Lowery in “Breakout Kings” and the leader of the deranged McPoyle family in “It’s Always Sunny in Philadelphia.” Here, he plays a man who has been dragged to Westworld by his co-worker, Logan (Ben Barnes), who thinks that a vacation full of hookers and bloody shootouts will get him to loosen up a little.

But it seems that William wants to take his own path through Westworld, as we saw in this week’s episode when he decided to go out on an adventure with an android bounty hunter to round up some bandits. In an interview with TheWrap, Simpson said that his character is the link between the audience and the world Jonathan Nolan and Lisa Joy have built, showing how most people would react to entering a world completely removed from the consequences and customs of everyday life. Simpson also talked to us about the importance of Evan Rachel Wood‘s android lady, Dolores Abernathy, as well as his experience playing games like “Grand Theft Auto” a decade ago.

When you were trying out for “Westworld,” how was the character first described to you?

William wasn’t explain in-depth to me at all. I actually auditioned for both Logan and William, and there were just a couple of scenes they created for the audition that didn’t actually exist in the show. They never gave me any backstory. Logan was closer to my wheelhouse, and I had some interesting ideas for where to take him. William was something I never really had been able to do, and I had to work with my partner because I couldn’t access my bag of tricks. It was just all new work. It was a great opportunity to get the role of William and to try something new.

Jonathan Nolan and Lisa Joy have mentioned in interviews that they didn’t give you guys scripts until it was time to film each episode. What was the process of building out your characters without all the secrets?

Well, Jonathan and Lisa have been working on this story for about eight years, so they know what’s going on. Every day that we were filming, at least one of those two was on the set. I don’t know how they were able to do since they were raising children and writing scripts too but at least one of them was always present for filming. So if anything was unclear, they would give you the immediate circumstances and everything we needed to know to play it honestly. None of us knew where our characters were headed or what the future held. It was a great acting exercise to only know the immediate circumstances because you can’t tip your hat. You don’t know where the story’s headed.

So far in “Westworld,” we’ve seen lots of people like Logan who come to the park for sex and violence, but we’ve also seen people like William and some families who are there for less lurid reasons. Do you think there are more Williams or Logans in Westworld?

I think William is more of an exception in this world, and I think that’s what Jonathan and Lisa are trying to convey in this story. They’re showing how one exception can change everything. It’s the same with Dolores. It’s just one host feeling something different, and she starts sharing it.

In the pilot, most people are there to shoot, have sex and drink. It’s Extreme Vegas, and it’s very expensive, so only a few people can take a part in it. William is an exception because he’s dragged to this, as opposed to almost everyone else who has paid a lot of money to go there and rip shit up. So when you take out this expectation of destruction, you are left with wider eyes. I think William is able to observe more and to take part in the fantasy rather than stomp on it.

At the end of episode 2, we see William and Dolores meet for the first time while Dr. Ford (Anthony Hopkins) gives a speech about how Westworld isn’t about telling people who they are, but who they could be. Is that where you think William is headed when it comes to his journey?

I think that with where we are heading as a society, Lisa and Jon wanted to show this from the perspective of the androids. So I think that when they talk about this world showing what they could be, I think they are talking more about Dolores and the other androids as they discover who they can be when they are unhinged from this loop. William is more of a catalyst for her, but he is clearly a guy who is begrudgingly moving forward. He’s stuck in an emotional rut and doesn’t like what his life is right now. This journey could potentially be a bigger start in his life.

There have been lots of comparisons of this show to “Grand Theft Auto” and “Red Dead Redemption.” Have you played either of those games prior to doing “Westworld”?

I was a pretty big gamer until about four years ago. Then I had a priority shift and I haven’t had the time to play as much…but I have probably logged as many hours on “Grand Theft Auto: Vice City” as much as any human on the face of the earth.

I get asked a lot about what I would do in the park, and truthfully I tell them that I would try to be a part of the park and explore the fantasy. But the fact of the matter is that we all change, and I was just a much more irritable person until a few years ago. I would watch Fox News to piss myself off and then I would go play “Grand Theft Auto” and just wreck shit. In “Red Dead Redemption,” unless it took points from me I would just take everyone down around me. It was this release valve to my life, but now I don’t have that itch to scratch anymore.

There’s already been a lot of fan theories thrown around out there, including one that states that William’s scenes are secretly flashbacks that show how he turns into the ruthless killer played by Ed Harris. What do you think of some of the theories you’ve seen so far?

It reminds me of us, the cast, when we were getting each script. We’d speculate and have the most genius ideas of what this is all gonna mean. Then the next script would come out and we’d go, “Oh, never mind.” But some of us would jump up and go “See, I was right!” I’m glad everyone else is feeling the exact same way we did, and I love all of them and I love that one theory. It’s very flattering.