(Spoiler warning: Don’t read this if you haven’t seen the “Westworld” premiere yet.)

When “Game of Thrones” leaves us in 2018, HBO is hoping that its fans will have made the jump to “Westworld,” a sci-fi adventure that promises as much sex and violence as Westeros with some Asimov-style ponderings on artificial intelligence and human morality thrown in. If the pilot episode is any indication, the potential is certainly there for viewers to get swept away in theories and philosophical discussions, but you’re going to have to pay attention.

We begin with the introduction of Dolores Abernathy (Evan Rachel Wood), a lovely belle in the Old West who is blissfully unaware that she is an android in Westworld, a theme park for the 1 percent that allows them to fulfill whatever cowboy fantasy they want. Usually, this involves shooting the male androids and having sex with the female ones. While we get some introductory shots of Westworld, we hear Dolores being interviewed and asked about her (very rosy) views of the world.

Meanwhile, a man by the name of Teddy (James Marsden) arrives in town, and turns down an offer to go hunting for a bandit. This world is riddled with androids offering all sorts of adventures, like NPCs in a video game offering side quests. Teddy meets up with Dolores, who recognizes him from a past meeting. The two have a romantic excursion, but when they get back to Dolores’ house, they hear a gunshot. Teddy runs in like a noble hero, but it’s too late. Dolores’ parents have been shot.

Also Read: What Is 'Westworld' About? A Short Explainer

And then we get the scene that’s simultaneously the big twist of this episode and the source of all the controversy surrounding “Westworld.” A mysterious man known as the Gunslinger or Man in Black (Ed Harris) shows up and drags Dolores to the barn. Teddy tries to shoot him down… but his bullets have no impact. That’s because androids in Westworld cannot harm real human beings, which means that (spoiler, spoiler, spoiler) Teddy is an android and the Gunslinger is human. The Gunslinger shoots Teddy dead and drags Dolores off to be raped. Meanwhile, we continue to hear Dolores being interviewed, and when a voice tells her that she was designed to “gratify the desires of the people who visit your world,” Dolores receives this with peaceful acceptance.

The next day, Dolores wakes up with no memory of what has happened. Teddy and her dad are alive again, and the day starts again just as before. We are taken behind the scenes to the futuristic labs where the androids are created and maintained. There we meet the staff of Westworld, led by Bernard (Jeffrey Wright), the park’s head programmer. We also meet the enigmatic Dr. Robert Ford (Anthony Hopkins), the creator of Westworld. Dr. Ford has a bit of a sentimental attachment to his creations, and sees Westworld as something more meaningful than a place to get rich.

Unfortunately for Bernard, he’s got some major problems. One of the androids he recently updated malfunctioned while talking to a park guest. He’s being harassed by the park’s boss, Theresa (Sidse Babett Knudsen) and the foul-mouthed narrative creator, Lee (Simon Quarterman). Bernard thinks the malfunction isn’t too much of a problem, but there’s more to it than he thinks. Later, another android breaks free of his programming and starts shooting other androids that he shouldn’t be interacting with. Like the first android, this one has been recently updated, and that means that park management needs to come up with a way to call back all the updated androids without spoiling the experience for the guests. Fortunately for them, Lee has a plan.

Back at Dolores’ house, her father has found something he shouldn’t have found: a picture of a woman in modern New York City. The picture causes him to go haywire, and he grabs Dolores with fear in his eyes. “Hell is empty,” he whimpers. “And all the devils are here!” Dolores runs back into town to get help from Teddy… right as Lee’s plan is about to unfold.

And now we get the ultra-gory violence we’ve come to expect from HBO on Sunday nights. While a western rendition of The Rolling Stones’ “Paint It Black” plays underneath, a gang of bandits programmed by the park comes in and starts shooting all the androids the park wants recalled. Think of it as them being written out of the story. Along the way, they take down Teddy (again), which sends Dolores into a crying fit (again). Lee and Theresa celebrate their success… until the bandits’ shootout ends prematurely after a visitor shoots them dead. The visitor and his wife then gush over their fresh kill like two teenage boys giddily playing “Grand Theft Auto V.”

The park’s crew picks up all the dead androids and inspects them. Among them is Dolores, who is subjected to the interview we heard in the opening scene. Meanwhile, Dr. Ford interviews her father, who stammers about how she has to warn Dolores about what “they” are doing to her. Then the android turns sinister and promises revenge on his creators. “You’re in a prison of your own sins,” he hisses. Dr. Ford simply dismisses this as a malfunction, noting that the android had previously taken a role in a ghost story side quest and that his personality for that role was merely resurfacing. But that isn’t the case, because Dolores reveals that after he saw the photograph, her father whispered something in her ear. What did he whisper? It was a line from Shakespeare’s “Romeo & Juliet”: “These violent delights have violent ends.”

The next day, Dolores wakes up and goes about her usual routine, completely unaware that the android that played her father has been stored away and replaced with a new one. A fly lands on Dolores’ neck, but unlike all the other androids, she swats it off her. End episode.

Next week, we meet a mild-mannered man as he takes his first journey into Westworld with his violent buddy, and the Gunslinger goes hunting for the most challenging game the park has to offer. 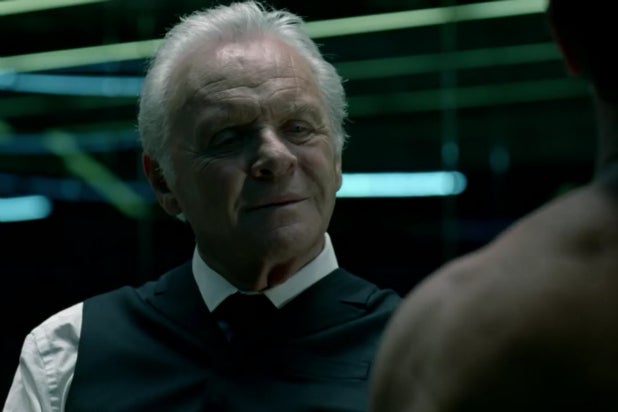