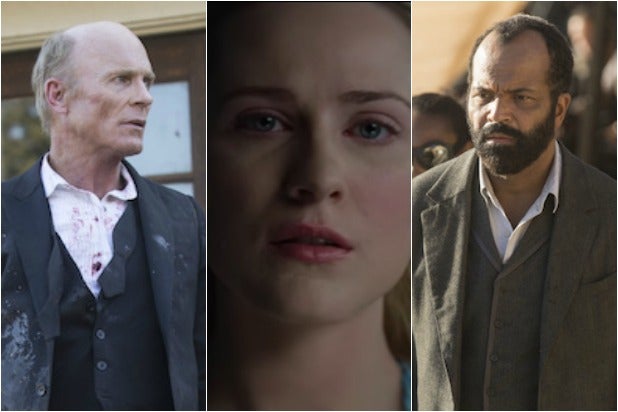 Following a freshman installment famous for the tricks it played on fans by scrambling up its chronological scenes, the HBO sci-fi hit’s Season 2 premiere — “Journey Into Night” — introduced (at least) three new paths for us to follow.

And while unwrapping Season 1 required pretty much all of Reddit to come together to figure out what happened and when it happened before creators Jonathan Nolan and Lisa Joy unraveled it on screen, it already looks like their second crack at messing with you will be just a little bit easier to follow.

See, it’s all going to come down to Bernard (Jeffrey Wright) — our constant in the little-over 70-minute episode’s timelines — who seems to be having a hard time keeping them straight himself.

TheWrap breaks down the sequence of events in the premiere… and reminds you to obsess over whether or not Wright is wearing glasses in any given scene for the next 10 weeks.

The episode opens with what is our oldest and easiest timeline to pick out: Dolores (Evan Rachel Wood) and Arnold (also Wright, but not Bernard) having one of their classic chats way back before the park, opened approximately 30 years ago. He wipes off his glasses, before he resumes telling her about a dream he had in which he was in an ocean, with her and “the others” on a distant shore. Arnold says they left him behind and the waters were rising up around him.

Dolores is curious to know what this means. When he tells her it’s nothing, just a dream, we know it’s Arnold and not Bernard because he’s “frightened” with how quickly she’s learning and concerned about the path she might take one day. So, you know, real Old School Dolores. Like Pre-Murdering-Arnold-at-His-Request Dolores.

This timeline is only seen once in the episode and is defined by its inclusion of Arnold and lack of his robo-counterpart.

A second timeline picks up following the “present day” ending for Season 1: when Dolores killed Robert Ford (Anthony Hopkins) of her own freewill with a blow to the back of the head at a party in the park.

This particular section of the Season 2 story begins with Bernard (WHO IS WEARING HIS GLASSES) hiding in a stable near the shindig with executive director of the board of Delos Destinations, Charlotte Hale (Tessa Thompson), and a few terrified guests. Bernard — who only recently discovered he was a host, but is trying to keep it on the DL he’s a host — has some gooey stuff coming out of his ear. However, he doesn’t have a ton of time to worry about that, as the group needs to escape before the rebellious robots get to them.

Charlotte and Bernard (’cause those other dummies get killed when they fall for a host-set trap) trek to an outpost lab in the park to try and contact Delos’ main offices and let them know they need to begin extraction protocol. But, yeah, no, they won’t do that until they can get that “package” Charlotte believed they already received: decommissioned host Peter Abernathy (Louis Herthum), who is stuffed with info about the park and its inhabitants. As we already know, they didn’t get Peter out of the park, so until Charlotte and Bernard can find him, they’re all screwed. Bernard says he can probably locate Peter through the hosts’ “mesh network.” While he’s working on that, he also extracts some of that gooey stuff from another robot and shoots himself up without Charlotte noticing. Oh and they locate Peter.

Also Read: 'Westworld': Here Are Some Characters to Watch for in Season 2 (Photos)

Situated in this same timeline are Dolores and Teddy (James Marsden), who show up galloping on horses while gunning down guests to the tune of the “The Entertainer,” in what is arguably the best use ever of that overplayed song. It’s safe to assume we pick up with our host couple — and the small posse they’ve formed — just a few hours, or at most a day, after she began her reckoning. They’re stringing up parkgoers who beg for their lives, as Dolores reveals she has “two minds about” her plan for revenge: on the one hand, she’s the rancher’s daughter who seems more willing to forgive, and on the other, she’s Wyatt, who hopes you get what’s coming to you in the most violent of ways.

Then we have the Man in Black (Ed Harris) — who we also now know to be an older version of William (Jimmi Simpson) — waking up on the ground in the park in the same clothes he was wearing to the party. He’s immediately involved in a human-host shootout, but suffers a mere flesh wound. He finds refuge in a location where he can both wrap up his bloody arm and grab a new black hat — ’cause what is the MIB without his trademark chapeau? Old William runs into that Young Ford host, who finally tells him what he’s been waiting to hear for years: he has a new game to play, and this one is actually made for him. And then he shoots the robot in the face and heads off on his new journey.

And to round out this nice big, confusing second piece of this season’s puzzle, there is Maeve inside the labs with Lee Sizemore (Simon Quarterman). Having just exited the train that would have taken her outside of Westworld, the madam reluctantly teams up with Lee to look for her daughter. Though she finds her partner-in-crime Hector (Rodrigo Santoro) — don’t worry, he’s forgiven her for abandoning him — they still need to keep the head of the narrative department around to help them navigate the park.

3. Two weeks after the massacre

And now we’ve made it to the third timeline of the season. Well, third timeline in the premiere, at least. Bernard wakes up on a beach, with his glasses laying beside him. OK, so those guys get washed away and then he DOESN’T WEAR ANOTHER PAIR IN THIS TIMELINE FOR THE REST OF THE EPISODE.

That’s going to be a real helpful indicator of where we are at any given moment, even though Bernard himself seems to be having flashbacks to timeline 2.

Anyway, some unfamiliar Delos employees find Bernard, but have no idea who he is, until Stubbs (Liam Hemsworth) shows up — he’s alive! — to advise them not to shoot the boss. Here is where we meet Karl Strand (Gustaf Skarsgård), head of operations for Delos, who is barking at members of the Chinese military, telling them his company has full authority over “the island.” He asks that they sign an NDA and get the heck out. (Yeah, we’re gonna let you mull over that whole island and Chinese military part on your own; we’re just dealing with timelines here.)

Park workers are busy rounding up hosts and executing them, as Strand informs a very frazzled Bernard (who is keeping his robot status to himself in this timeline too) that communications have been down for two weeks, so they are “largely in the dark” about the “single biggest loss of life on a Delos property.”

This is where we meet new character Antoine Costa (Fares Fares), a tech expert who is charged with scalping a Native American host to pull out his lightbulb-like “brain” (which is floating in that same gooey liquid Bernard was dealing with in timeline two) and review his last recorded memory before he “died” 11 days and 9 hours ago: Dolores shooting him.

Everything else that happens with this group (including finding Ford’s bloated body, a tiger and that random sea full of hosts) is in the third timeline. And while Bernard’s memory might be on the fritz at the moment, he and his glasses (or lack thereof) are our key to following along.

Of course once Simpson (who wasn’t in the premiere) and other past timeline characters start to show up, things are going to get more confusing. But let’s stick with this for now.

'Westworld': Here Are Some Characters to Watch for in Season 2 (Photos)

In "Westworld" Season 2, we're going to learn more about the nuts and bolts of Delos and get introduced to Shogun world, but there are also several characters that had smaller parts in Season 1 who we'll be getting to know better as the story continues. Based on the trailer and Season 2 photos so far, here's who we're expecting to see more of this season.

Mild spoilers for people who haven't watched Season 1 or any of the Season 2 trailers.