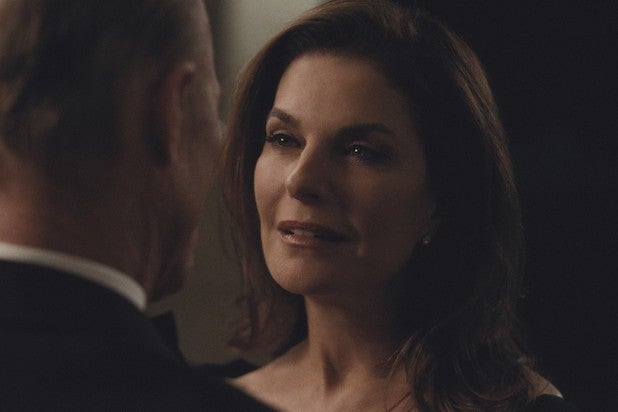 Juliet is dead on “Westworld” — but that doesn’t mean Sela Ward’s relationship with the show needs to be.

After her character’s chilling death by suicide on Sunday’s episode — Season 2’s penultimate installment that also served as our introduction to the older version of William’s (Ed Harris) wife — we know we won’t be seeing her in the HBO sci-fi series’ current timeline. But thanks to the many flashbacks the show features, it’s not out of the question that Juliet will return.

Also Read: 'Westworld': OK, Seriously, Is the Man in Black a Host or Not?

“We absolutely talked about the possibility,” Ward said in an interview with Entertainment Weekly, published after the episode, about conversations with co-creator Lisa Joy. “I don’t know that they have made that decision. I think they keep all of that very close to the vest, and we’ll see. I have no idea.”

This episode, titled “Vanishing Point,” took us into the show’s very recent past for an inside look at an evening with the MIB (aka an older version of Jimmi Simpson’s William) and his family life outside of the park. Set on the night his lovely (but disturbed) wife Juliet killed herself, we find out she did it because she saw who he really was and what he has done, thanks to an ID chip that revealed his doings inside of Westworld.

“I don’t think she thinks he’s a robot,” Ward said of how Juliet perceived William before she died (as him possibly being a Host is not out of the question at this point in the game). “I think she saw, through that data card, what a real monster that he had become. She saw all of the… he was really beyond redemption, all of the horrors that you could ever imagine a human being committing. Killing and torture. Looking at the reality of she doesn’t even know who she is married to. It’s real life, profoundly shocking.”

Also Read: 'Westworld': Jeffrey Wright on How Bernard Finally Got Ford Out of His 'F--ing Head'

Before Juliet takes her own life, we also see her and William’s adult daughter, Emily (Katja Herbers), is concerned about her mother — a recovering alcoholic whose behavior becomes embarrassing at a party — and wants to get her back into treatment. Juliet refuses to go, and insists she is fine, placing the blame for her troubles onto William and insisting to their daughter he doesn’t love either of them and never has.

Ward says it is correct to assume Juliet died thinking her daughter believes she’s “just a drunk” and doesn’t know why.

“This mother-daughter relationship is very complicated,” Ward said. “I think she felt very betrayed by her daughter, betrayed by life in a way, between her husband, who she doesn’t even know and who has been this monster revealed to her, and her daughter wants to send her back to rehab because she considers it equivalent to an institution. There is really no safe space, nowhere to turn. I can’t even imagine the loneliness of that. Despair is such an interesting state of being for a human being. It’s so incredibly debilitating to think that’s what you’re seeing a portrait of and why she just feels there’s no way out.”