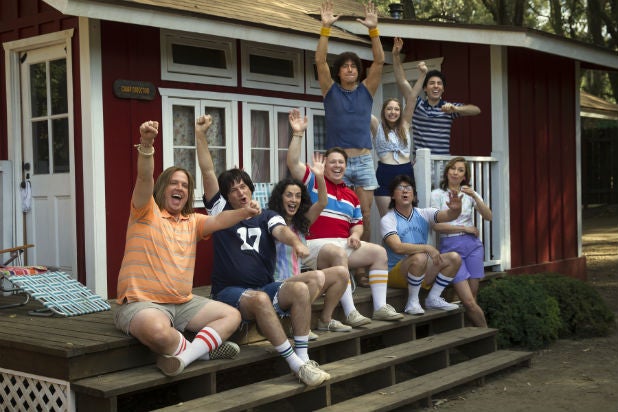 “It was a real throwback. It felt like a family reunion and a college reunion all at once,” Wain told TheWrap in an interview. “I remember very specifically the first day of shooting we shot the staff meeting scene outside the office, and seeing everyone sitting on those steps, I almost had an out-of-body experience.”

Wain, who directed and co-wrote the original 2001 cult hit film that the series is based on, also said making the show required coordinating the schedules of “60-plus people.”

“It was a combination of people from the original movie and new people that all were irreplaceable,” Wain said. “And mixing and matching all of them to make sure we could shoot every scene. But we had the ultimate tool which was the fact everyone wanted to do it, and then it just became a simple matter of puzzle-making and logistics to get everyone there.”

And despite the fact that several of the film’s stars — like Bradley Cooper, Amy Poehler, and Paul Rudd — have gone on to major box office success, no one in the cast let their ego get the better of them.

“Not only did nobody have crazy demands, it really just felt like the same old thing,” Wain said. “So the biggest stars there, Bradley Cooper and Rudd, everyone’s just hanging out. Their personalities are exactly the same as they were back then. They haven’t changed nearly as much as one might think.”

He went on to say that the film and subsequent series would not have been the same without the high-quality actors who inhabited each role. “We write something on paper, but the great pleasure of working with truly charismatic, star-level actors is that they bring a whole giant level to it that you could never conceive of on paper or as a filmmaker,” Wain said.