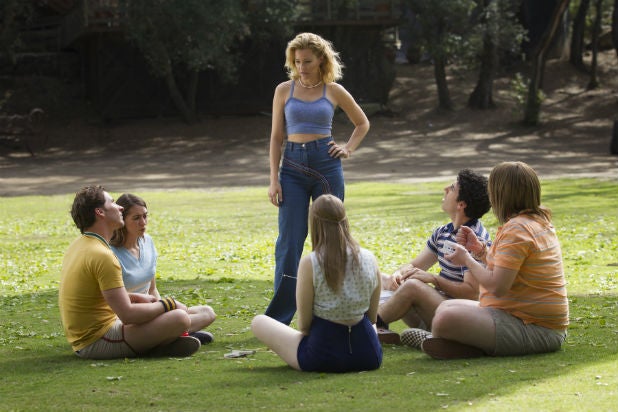 “Wet Hot American Summer: First Day of Camp” feels and operates a little bit like a joke shop. Fart jokes? Just over here, sir! Dry whimsy? Why, our clerk Janeane Garofalo can help you with that! The result is a predictable mishmash that can be simultaneously stale, nostalgic and hilarious. The outcome just depends on what you’re shopping for.

The biggest joke of the entire Netflix prequel to the 2001 film is, of course, that the movie’s cast of then-30-somethings is even less eligible to play teenage camp counselors as 40-somethings. The series has great fun with that, from Elizabeth Banks’ Lindsay tossing her hair up into a side barrette in order to “believably” transform into a 16-year-old to counselor Abby (Marisa Ryan) changing from a pre-pubescent into a 40-year-old in the span of time it takes for the onset of menstruation.

Those are the obvious jokes to a series that proudly wears its obviousness on its sleeve. More subtle gags abound throughout, so make no mistake that there’s more to the eye than a send-up of 1980s teen camp comedies and a reunion of a bunch of funny actors who had a great time working together 15 years ago. Summer camp was an exhausted genre when the film first debuted; now it’s as relevant as a spoof of 1950s monster movies.

Where the series surprises is in its attention to the intersecting plots, which have been carefully crafted so that what was bizarre and unexplained in the film (the talking can of vegetables; Christopher Meloni’s deranged chef; why David Hyde Pierce’s astrophysicist lives next door) is bizarrely explained. Pierce’s backstory, in particular, is one of the strongest sequences of the series, playing out like the trailer for a comedy of manners set in academia. But the series spoofs almost every subgenre imaginable, from undercover journalists to corporate thrillers to cross-dressing comedies.

The 8-episode series (only six episodes were made available to critics) mostly succeeds by sheer force of will. The viewers are so bombarded by jokes that something is bound to tickle you eventually–though truth be told it may take awhile. What is more problematic is that the schedules of everyone involved were so obviously difficult to coordinate that the series feels like a series of loosely connected vignettes; never do you get the sense that Bradley Cooper and Paul Rudd ever interacted.

In terms of the performers, Banks steals the show. A total unknown when she was cast in the film, she continues to ride the wave of her very good 2015 (an Emmy nomination, “Pitch Perfect 2”) as Lindsay, whose weird backstory is one of the series’ best. But everybody gets the chance to shine, from Amy Poehler’s sexually frustrated drama counselor to Showalter’s counselor forcing himself into the puka shell chokers and porkpie hats that his girlfriend insists he wear. He looks so ridiculous yet confident that the result moves from goofy to awkwardly charming — which is pretty much a summation of “First Day of Camp” as a whole.