In recent days, reports in theWrap and elsewhere have pointed out several high-profile films that aren’t eligible for the Writers Guild of America Awards, whose nominations will be announced next Monday.

“Inglourious Basterds,” “A Single Man,” “The Road,” “An Education,” “Me and Orson Welles,” “In the Loop” and “District 9” all failed to qualify under WGA rules, which require scripts to be written for productions that are signatories to the guild’s Minimum Basic Agreement, or the agreement of affiliated international guilds.

Scripts must also be officially submitted to receive consideration.

I can now add a few more that aren’t on the WGA ballot: “Adam,” “Antichrist,” “Broken Embraces,” “Capitalism: A Love Story,” “The Imaginarium of Dr. Parnassus,” “The Loss of a Teardrop Diamond,” “Moon,” “Trucker” and “The White Ribbon” in the original screenplay category, and “Angels & Demons,” “Coco Before Chanel,” “The Damned United,” “Everybody’s Fine,” “The Men Who Stare at Goats,” “Red Cliff,” “That Evening Sun” and “A Woman in Berlin” on the adapted screenplay side.

Animated films for the most part are not eligible; “Fantastic Mr. Fox,” “Ponyo,” “The Princess and the Frog” are among those that didn’t qualify, although “Coraline” did.

What, you might wonder, is eligible? Here’s the answer: 47 adapted screenplays (compared to 153 that qualified for the Academy Awards) and 36 original screenplays (as opposed to 106 Oscar contenders). 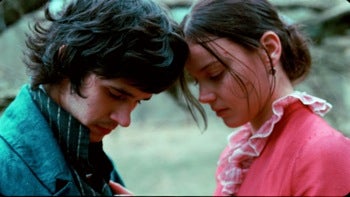 Jane Campion’s “Bright Star” (right) qualified in the WGA’s original-screenplay category, whereas the Academy’s writers branch placed her in the adapted category. And several films that didn’t qualify for the Oscar are in the running at the WGA Awards, the most notable being “The Girlfriend Experience,” the David Levien/Brian Koppleman script that was directed by Steven Soderbergh.

That may lessen their value as an Oscar precursor, but it’s not an unreasonable stance for a union to take.

AMELIA
BAD LIEUTENANT: PORT OF CALL NEW ORLEANS
THE BLIND SIDE
BROTHERS
BRUNO
CONFESSIONS OF A SHOPAHOLIC
CORALINE
CRAZY HEART
FIFTY DEAD MEN WALKING
HANNAH MONTANA: THE MOVIE
HARRY POTTER AND THE HALF-BLOOD PRINCE
HE’S JUST NOT THAT INTO YOU
THE INFORMANT!
THE INFORMERS
INVICTUS
JULIE & JULIA
THE LAST STATION
THE LITTLE TRAITOR
THE LOVELY BONES
THE NARROWS
NINE
PRECIOUS: BASED ON THE NOVEL ‘PUSH’ BY SAPPHIRE
THE PRIVATE LIVES OF PIPPA LEE
PUBLIC ENEMIES
RACE TO WITCH MOUNTAIN
SHERLOCK HOLMES
THE SOLOIST
STAR TREK
THE STONING OF SORAYA M.
TAKING WOODSTOCK
THE TIME TRAVELER’S WIFE
TRANSFORMERS: REVENGE OF THE FALLEN
THE TWILIGHT SAGA: NEW MOON
UP IN THE AIR
WHERE THE WILD THINGS ARE
WHIP IT!