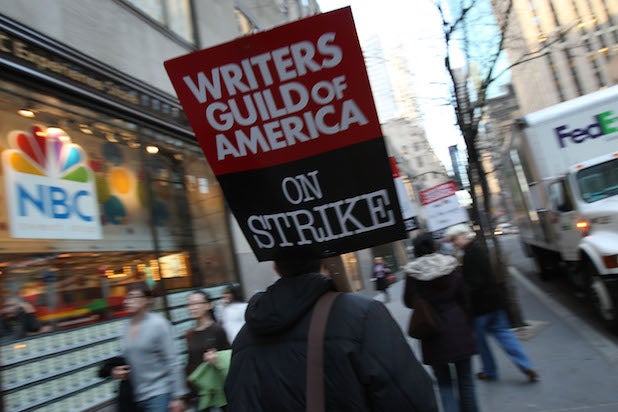 (Update: A WGA rep has denied the guild has issued any “memos to members or updates on the status of negotiations.” Read the details here.)

With talks resuming later Sunday afternoon as the Monday night deadline approaches, the WGA has sent a memo to strike captains telling them to get ready to man the picket lines on Tuesday morning if a deal cannot be made or negotiations cannot be extended, according to Variety.

“If you’ve left anything great in your office on a studio lot,” the memo reads, “consider packing it up on Monday – just in case.”

The current contract between the WGA the Alliance of Motion Picture and Television Producers (AMPTP) is set to expire at midnight PT on Monday. The memo says that negotiations could go on after the deadline ends if progress is made.

“We know this is anxiety producing,” Chris Keyser, WGA leader who is one of the three on the negotiating committee, is quoted as saying in the memo. “We’re asking everyone to live in the anxiety with us for the next few days.”

Also Read: Here's Why Hollywood May Be 2 Steps Closer to Evading a Writers' Strike

While exact time and locations for strike marches have not been set, WGA is hoping to have a presence on Monday at a May Day pro-labor march in downtown Los Angeles. Representatives for WGA and AMPTP did not respond for comment, as a media blackout has been put into effect until this round of negotiations has ended.

Negotiations between the writers and producers began on March 13 but stalled two weeks later. The two sides returned to the table this week after the WGA received approval from 96 percent of their members to authorize a strike if a new deal couldn’t be struck. Among the sticking points between the WGA and AMPTP include a new pay formula for writers on short-order TV series, a refurbishment of the WGA’s health plan, and compensation for new media.

The health plan has been a particular point of contention, as studios are looking for millions in cuts and for writers to cover more of the costs. The WGA is defending the plan, saying it provides a financial safety net for writers when they go for months without getting attached to a project.

The memo specifically states, “There is a press black-out until this round of negotiations is over.” When asked for comment, a spokesperson for the WGA says, “The Writers Guild has not issued any memos to members or updates on the status of negotiations.”

Also Read: Here Is the List of Demands From the WGA as Writers' Strike Looms

Read the full memo below:

I hope you’re all doing well. There was a strike captains meeting at the Guild this AM, and I am officially reporting back.

1.) From leadership: thank you as a Guild for your amazing solidarity. The results were 96.3% “yes” on an SAV. You gave our team the best negotiating tool possible. In a time where labor is threatened in the country, it was an inspiring act of unity.

2.) There is officially no news. There is a press black-out until this round of negotiations is over.
Negotiations could go down to the wire, until the clock strikes midnight on Monday May 1.

3.) Negotiations could go for a few days after May 1 (hopefully this would mean a deal is in sight – but it might not)

4.) Be ready to strike Tuesday May 2. If you’ve left anything great in your office on a studio lot, consider packing it up on Monday – just in case.

5.) Again, be ready to strike if necessary.

6.) The Guild leadership (Chris Keyser) said, “We know this is anxiety producing. We’re asking everyone to live in the anxiety with us for the next few days.” That’s how a deal will get done.

7.) Member meetings & next steps will happen after we have a deal or May 2nd. There isn’t a schedule yet because the Guild is waiting for negotiations to wrap. (Showrunners, if you want to talk strike rules in the next few days, call Ann Farriday.)

8.) If necessary, pickets will be at 8 studios, 3 shifts per day. The goal is to be flexible geography-wise for members. Also, there are always shifts at headquarters manning phones for anyone with physical issues.

9.) INVOICE STUDIOS BEFORE TUESDAY MAY 2 FOR MONEY THEY OWE YOU!

10.) Tuesday means “pencils down” as well as “Avids off.” This year, strike rules will mean: no editing, no production, no shooting – no A-H duties.

11.) As we fight for our union, there is a May 1 Pro-Labor march planned in Los Angeles. It would be great if WGA members went and repped labor. T-shirts available now at WGA headquarters.

Hopeful note? The AMPTP took a break to go back and talk to their respective CEOs (they didn’t break off negotiations – just went to go talk to corporate bosses and will be back at the table Monday). Maybe this is good. Maybe not. We’ll know more early Tuesday AM.