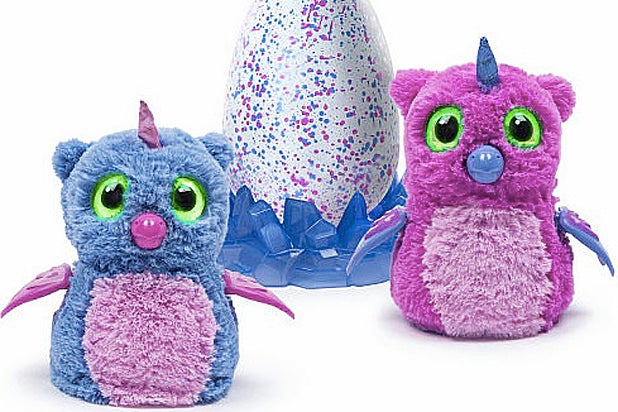 Pokemon GO is so last summer. There’s a new toy craze sweeping the globe and it doesn’t involve users turning into mindless zombies and walking into traffic or off cliffs.

If you are unfamiliar with this bizarre but totally adorable creature that is driving parents around the world crazy as they scramble to buy them before Santa arrives, a Hatchimal is like a sophisticated hybrid of a Furbie and Tamagotchi, according to The Independent.

Coming in bright neon colors, the birdlike pets are purchased while still incubating in their egg and only hatch (hence the name, get it?) when they’ve been played with by their owner enough.

The more it is played with, the faster it hatches and develops, going through the normal stages of development like a child. Each Hatchimal is unique so the birthing experience is different for each one, according to the official website.

Once it reaches the child stage, it can then be taught to talk and walk or spin (Warning: A spinning Hatchimal may cause dizziness).

The creatures are designed to look like penguins, koalas and dragons, and come as part of the Pengualas or Draggles families.

Also Read: Look How 'Pokemon Go' Has Out-Grossed 'Star Trek Beyond' and Other Summer Hits (Chart)

The concept sounds simple enough, but it is obsessively appealing to kids, and Hatchimals have been flying off shelves both in the U.S. and the U.K. since the line was launched earlier this month. Toys ‘R’ Us, Target and Walmart have already sold out, and manufacturer Spinmaster had to release a statement apologizing for the shortage in eggs.

“The consumer response to Hatchimals has been extraordinary, exceeding all expectations,” it said on the official website, explaining that a new batch is expected in early 2017.

Hatchimals retail at $59.99 but are now being sold for over three times that amount on eBay.

Read the full message from Spinmaster below:

The consumer response to Hatchimals has been extraordinary, exceeding all expectations. Some of our first shipments have already sold out. While additional product will hit retail shelves in November, we anticipate this inventory will also sell out quickly. We have increased production and a whole new batch of Hatchimals will be ready to hatch in early 2017.

This is a special season and we don’t want anyone to be disappointed, nor do we support inflated prices from non-authorized resellers. We are working on creative solutions to help kids and their parents withstand the wait. In the interim, some retailers are developing pre-sale and/or rain-check programs for redemption in January. We will continue to update with program details as they become available.

If you’re lucky enough to get your hands  — we mean, your kids’ hands — on a Hatchimal, here’s a handy video on how to play with it.