Bitcoin mining. If you’ve been following the seemingly endless streams of stories trumpeting up — and throwing cold water on — bitcoin, you’ve probably come across mentions of “mining.” But what is it exactly?

In short, mining is the process that both creates new bitcoin, as well as verifies transactions on the blockchain, bitcoin’s immutable ledger.

First off, though, you should know the basics of the blockchain, where all bitcoin transactions are tracked. Each “block” on the chain carries up to thousands of transactions awaiting approval. (Around Christmas 2017, when the cryptocurrency market was at its frothiest, there were about 2,700 transactions per block, compared to roughly 1,100 per block in early April.) You can picture the blockchain like Lincoln Logs stacking up. And the key for bitcoin true believers is the blockchain’s decentralized network. Rather than having a bank track payments, anyone can plug into the bitcoin network and help verify transactions.

That’s where miners come in. Miners run specialized software on their computers, aiming to solve a math equation that confirms each block. The equations aren’t easy — and it takes plenty of computing power and time to try and crack the code. As bitcoin moves toward its 21 million limit — with about 17 million in circulation right now — the calculations will increase in difficulty. It’s also not cheap, with mining “rigs,” or computers, that cost thousands of dollars.

Miners don’t just do it for the love of the game, either. There’s a financial incentive to keep the blockchain humming along, with 12.5 bitcoin being awarded for correctly verifying a block. At the current bitcoin price of roughly $6,600, that’s more than $80,000 per block. Add in the couple bucks in fees for each transaction in a block, and it can be a lucrative business.

But just like the gold mining boom of the 19th century, bitcoin mining is competitive. Running just one rig and expecting to solve the equation is a shot in the dark, so many miners pool their resources together and share their cut of the loot. 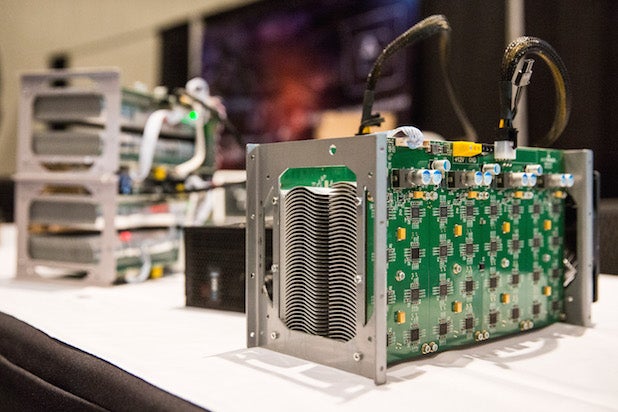 Also Read: 50 Cent Admits He Isn't a Bitcoin Millionaire After All

This also helps offset the cost of mining, which can get pricey. The mining rigs suck up a lot of electricity — not to mention paying for the fans needed to keep the machines cool while they crunch numbers. At the end of March, the average cost in the U.S. to mine a single bitcoin was more than $4,700. And just last month, Plattsburgh, New York temporarily banned the practice, because miners were using “upwards of 30 percent” of the town’s electricity, the mayor told TheWrap. That’s why you can find mining operations popping up from Washington state to Siberia, in search of cheap power.

Beyond the financial reward, many miners point to the excitement of being involved in a budding technology as a reason for their participation. With bitcoin born in the wake of the 2008 financial crisis, it’s decentralized ledger speaks to young investors hoping to take power away from the world’s major investment firms. This libertarian bend, coupled with having input as to how the bitcoin network grows, adds to the mining allure.

“I’m really in this game for the long run. The cryptocurrency network is very elaborate… [miners] are an integral part of the ecosystem in order to scale it up. I think it’s really cool to help shape the currency,” Laith Shehadeh, a 20-year-old miner from Cincinnati, told TheWrap.  “I truly like cryptocurrency because I believe it creates more efficient markets, eliminates a lot of inefficiencies, and it gives a lot of people more power and independence with their money.”

Also Read: I Lost a Fortune in Bitcoin - But I'm Still All In

Money, plus helping craft a new world currency. That about sums it up. If the bitcoin hype machine starts up again, like it did at the end of 2017, you’ll now know what it means when someone says they’re mining.