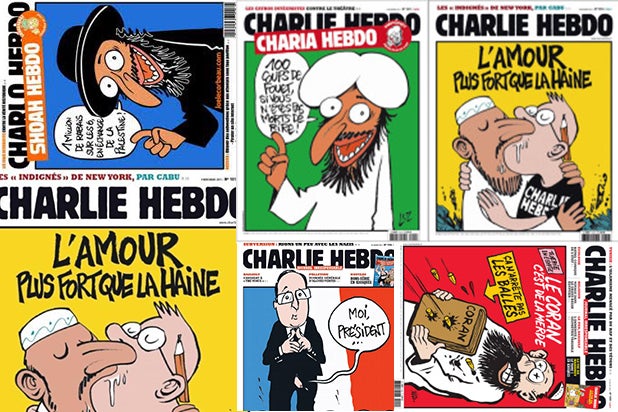 The weekly , where gunmen stormed into a news meeting on Wednesday and killed at least 10 journalists and wounded 11 others, was launched in 1969 as an anti-religious, left-wing newspaper. The paper’s name stands for a combination of the Peanuts character “Charlie Brown” and the French word for weekly, and is part of a long-standing French tradition for both political satire and cartoon commentary.

The magazine’s cartoonists and journalists have in the past poking fun at religion—more recently at Muslims and ISIS—soliciting outrage from people in the Muslim community.

The magazine posted a cartoon of ISIS leader Abu Bakr al-Baghdadi to its Twitter feed on Wednesday.

Early in 2014, Islamic groups tried to sue the magazine for blasphemy over a cover (pictured above) with a cartoon of an imam, saying, “Islam is s—.”  Its website was hacked in 2012 and its offices firebombed in 2011, both over shocking send-ups of Islam’s prophet, Muhammad.

Editor Stéphane Charbonnier—one of the 12 killed in Wednesday’s terror attack—described the pulse of the weekly as possessing “all components of left wing pluralism, and even abstainers.”

“Our job is not to defend freedom of speech but without it we’re dead,” Charbonnier told ABC News in 2012 in response to controversy over its cartoons mocking Muslim prophet Muhammad. “We can’t live in a country without freedom of speech. I prefer to die than to live like a rat.”

Charbonnier was one of the journalists murdered on Wednesday.

The newspaper’s most recent cover joked about author Michel Houellebecq’s new novel “Submission,” which speculates about a future in which France elects a Muslim president.

Another controversial cover was created in 2013, reading “Death in Egypt” with “The Koran is Shit” beside it and “This Doesn’t Stop Bullets” under it with an arrow pointed at the Koran.

Around the same time, the weekly reprinted controversial Danish cartoons of Muhammad.

The weekly’s knack for mocking came back to bite them in the form of violence: it was the victim of a firebomb attack in 2011 and was put on Al Qaeda’s most wanted list for cartoons attacking the prophet Muhammad.

But the violence didn’t cause the paper to back down–most recently, it targeted North Korea in a recent cover, mocking Sony for initially cancelling “The Interview,” and producing a cover of North Korean leader Kim Jong-un with the words: “Sony Licks the Fat Ass of the Big Moron Pyongyang’s Killer.”

In 1970, the paper was banned by France’s Minister of the Interior after it mocked press coverage of a nightclub fire that killed 146 people. The newspaper folded in 1981 but was brought back to life 11 years later, published every Wednesday with sporadic unscheduled editions being released on occasion.