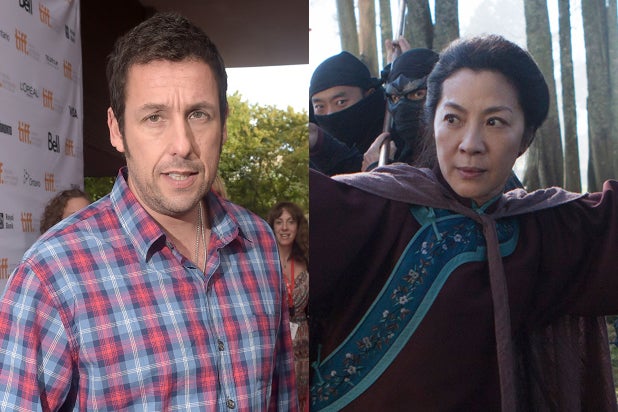 Netflix’s move into the film production business has much more to do with the subscription video giant’s global aspirations than with making a mark in Hollywood.

The streaming service — and now TV and movie production company — announced Thursday that it will bankroll four Adam Sandler films. That’s on the heels of its decision earlier this week to fund the sequel to “Crouching Tiger, Hidden Dragon.” The moves, coming within days of each other, generated a storm of publicity (and in the case of “Crouching Tiger,” criticism), along with some good will on Wall Street.

But financially, they represent just a drop in the bucket in terms of its overall spending strategy: Netflix content chief Ted Sarandos announced earlier this year that it would spend $3 billion on making TV and movies in 2014.

While Netflix may not have reached its peak penetration levels in the United States, it’s getting close, and the company’s primary growth potential lies in its ability to woo customers as the service rolls out in Europe, Asia and other overseas regions. Currently, three-quarters of Netflix’s some 50 million subscribers are in the U.S., while the company has barely scratched the surface internationally, where 80 percent of the world’s internet users are.

The company will “likely maintain the status quo in the U.S., but this may allow it to get more exclusive content in international markets,” Janney Montgomery Scott analyst Tony Wible said.

It’s very hard to pencil in a profit on its “Crouching Tiger” deal with the Weinstein Company and IMAX. It will be all but impossible to recoup the $40 million-plus that the company spent on what is basically a direct-to-video martial arts title, especially since U.S. and European exhibitors have drawn a line in the sand and won’t play it.

The Sandler deal is different, in part because the size, cost and intent of making the films is unclear at this point.

Sandler and his Happy Madison production company still have a deal, and a history of success, at Sony Pictures. So it’s logical that studio or another major — the deal is non-exclusive — would remain the launch pad for standard Sandler movies, which typically come with a budget in the $70 million-$80 million range and with a proportionate marketing outlay. Whether Netflix ramps up its operations and takes on that kind project remains to be seen, but it could be a ideal platform for the comedian’s smaller projects.

While his films have taken in $3.9 billion worldwide over the past two decades, the 48-year-old actor’s star appears to be fading, at least in the U.S. “Blended,” his Warner Bros. comedy this summer, was a disappointment and failed to crack $50 million in the U.S.

But this deal isn’t about domestic audiences.

“I would be more worried if they picked some American-based indie movies,” analyst Larry Tanz, CEO of Vuguru told TheWrap. “This is comedy, you want something that appeals to a global audience. You can’t do Jon Stewart. … It’s a good global play.”

But why Adam Sandler movies?

“They’re pretty smart and data driven over there,” said Tanz, referencing the European market. “If you look at the way that subscription and VOD work, it’s not about having the thing that just came out in theaters. It’s about people watching things repeatedly. … They may have a lot of data that suggests that people go back and watch Adam Sandler.“

In the short term, Netflix’s entry into the movie arena is good news for the industry. Another player on the production landscape means more potential business for creatives and the agencies. And Hollywood has always been glad to take money from deep-pocketed outsiders fascinated by the film biz.

Netflix is not a total outsider of course, and its recent foray into TV production gives it some credibility. But announcing plans to make movies and actually making them — much less realizing a profit — are two very different things. Nonetheless, Netflix’s move makes sense in terms of its long-term goal of becoming a platform for first-run theatrical releases, even if it does represent a short-term gamble.

“Maybe they can make the next ‘Superbad,'” said Tanz, referring to the low-budget Seth Rogen-Evan Goldberg comedy that became a $170 million smash in 2007. “In Hollywood, having commitments can equal creative risk. And Adam Sandler is at his best when he’s taking creative risk.”