At least, that’s the view from Wall Street, where Facebook just hit $185.25 a share in early trading on Thursday — erasing two months of losses for the social network after its massive data leak came to light.

Shares of Facebook had closed at $185.09 on March 16, but were pummeled in the following days and weeks, after the New York Times brought the leak to international attention. Facebook ended up admitting up to 87 million users had their profiles unknowingly compromised by Cambridge Analytica in 2014. The political firm leveraged its information to target voters online, and was eventually contracted by the Trump campaign during its successful 2016 run to the White House. 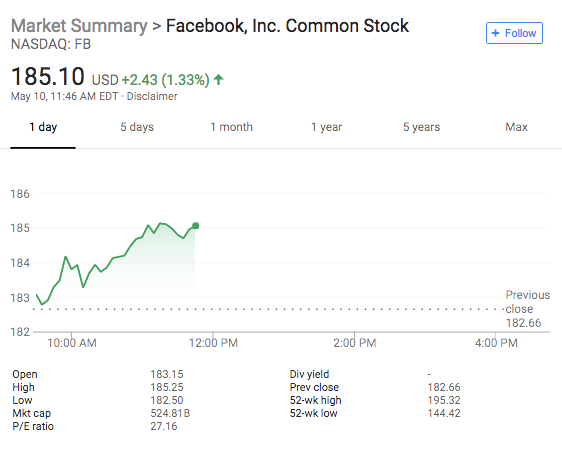 Facebook shares traded as high as $185.25 on Thursday, passing its pre-Cambridge Analytica market close (via Google)

Facebook’s stock took a beating in the aftermath, falling nearly 20 percent to about $150 a share in late March and early April. The uproar forced the company to audit “suspicious activity” on its platform, and curtail how it shares data with advertisers.

“We have a responsibility to protect your data, and if we can’t then we don’t deserve to serve you,” said CEO Mark Zuckerberg in early April.

The public mea culpas rolled on, with Zuckerberg heading to Washington, D.C., to testify before Congress on the leak. “We didn’t take a broad enough view of our responsibility, and that was a big mistake,” said Zuckerberg. “It was my mistake, and I’m sorry. I started Facebook, I run it, and I’m responsible for what happens here.”

Cambridge Analytica, for its part, closed down and filed for bankruptcy last week.

In the meantime, Facebook’s shares started to rebound. The company posted its second biggest quarterly revenue in its history when it reported its Q1 earnings last month, sending its stock higher. Facebook also added more users in North America, after a rare dip the previous quarter. The company now has 2.2 billion monthly users.

The public seemed to move on from the scandal as well. A recent Reuters poll found “about half of Facebook’s American users said they had not recently changed the amount that they used the site, and another quarter said they were using it more.”