A reader who owns a digital business takes issue with Nikki’s comment on the same post (linked below) that this month she "celebrates (DHD’s) 3rd anniversary and 50 million unique users."

He writes that this is impossible:

"Every time 1 person comes to your site, it’s a unique. It doesn’t matter if they come just one time or every day forever, they are still counted as only 1 unique. Let’s say she has 1M unique readers per month (which she is not even close to that), but for arguments sake we will use 1M. Now, most of her readers are repeat viewers, so if she has 1M in Jan, and 1M in Feb, that doesn’t mean she has 2M uniques. Let’s say that 750K are the same people that visit several times, and then she has 250K random strays that stumble upon the site in each month, that means she has 1.25M uniques over those 2 months.

"She could have maybe spinned 5M over 3 years even though that isn’t true either, but 50 Million would be like Lindsey Lohan saying she starred in Back to the Future. It’s beyond preposterous, it’s just that most people don’t have any clue what the numbers mean so they don’t realize how ridiculous of a lie it is."

He points out, correctly, that this doesn’t mean her site will not sell. 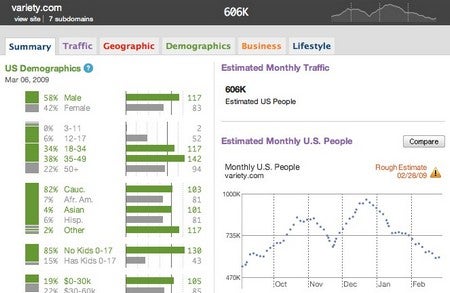 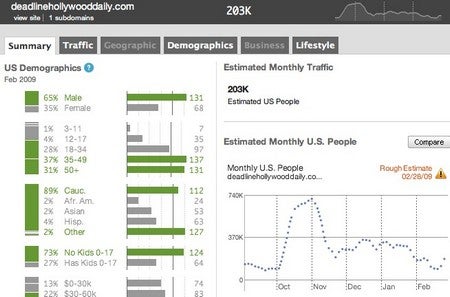 Nikki just called to complain about this post in very emphatic terms, but most of what she said was off the record, so I can’t share.

She did say, on the record, that she has never said that her site is bigger than Variety, only that Neil Stiles told her that his research showed DHD was a bigger "destination" site. (I’ve linked to her post below, so you can check it verbatim.)

"I don’t know what that means, if that’s readership or what," she said. "That’s according to my notes. I’ve never said my readership is bigger."

Maybe I need to call Neil Stiles on that one.

I called up Peter Bart, the longtime editor of Variety and a longtime friend, to ask about this report that he’d ordered up a “hit piece” on Nikki Finke – three of them, in fact – because she infuriates him: beating Variety on stories while berating other reporters yet never acknowledging when she makes mistakes.

To add insult to injury, Nikki (do I really have to call her “Finke”?) says that she was approached by Neil Stiles, Bart’s boss, to inquire about Variety’s buying her blog, Deadline Hollywood Daily. That must have stung.

“I’d never comment on anything having to do with Nikki Finke,” said Bart. “I’m not interested in internecine quarrels.”

Nonetheless, he acknowledged having ordered up the piece by Cynthia Littleton that took Nikki to task (and oddly, lumped TheWrap’s reporting about the Motion Picture Fund Home into this analysis), and another by Mike Fleming that questioned the journalistic enterprise of blogging.

“I’m very proud of them, I thought they did a good job,” Bart said.”It’s not in my nature to do hit pieces.”

There is no doubt that Variety is on the defensive, feeling the sting of declining readership and a collapsing ad market for print, and the pressure from competitors like DHD and even TheWrap.

Having cut its reporting staff, Variety’s website is hurting; the latest Quantcast numbers show Variety.com’s readership as having declined to 600,000 uniques, down from about 800,000 just a year ago.

(It’s worth noting that Nikki is way off when she says her readership is equal to Variety’s. It is about a third, according to Quantcast. But we digress.)

So in these circumstances, would a bold – if apparently unlikely – move like buying DHD make any sense?

The people I know inside Variety are quite literally confused by the thought. “It’s a little shocking to read that,” said a senior reporter, who has felt the force of Nikki’s frequent attacks on Variety. “But things are changing so fast around here. Every day I have to go into work with a clear slate, and not be surprised by anything.”

Nikki wrote that Variety ultimately “would not be able” to buy her site. What does that mean? That the company, with steadily declining revenues, didn’t have the cash? I asked her. She said to “read between the lines.” (I hate doing that.)

But having taken itself off the sale bloc at the end of last year after a $2 billion offer failed to materialize, Reed Business Information has been focused on stemming the bleeding in its profits. “These are tough times,” said one senior person at Variety. “Wouldn’t you spend that money on a reporter, not Nikki Finke?”

Not necessarily. And it’s tempting to consider what DHD might be worth. With steady traffic of 200,000 monthly uniques and a male audience of educated and economically desirable readers, she would probably get a premium.

One analyst  suggested she’d get about $2 per unique, or about $400,000, at most. I am told with good authority that the former publisher of Variety, Charlie Koones, was willing to pay $500,000 a couple of years ago.

Another company that looked at buying the site, which is owned by Nikki and not the L.A. Weekly, said that they went away after she refused to put ‘cookies’ on her site that would provide more data about her readership. She has told me recently that a couple of offers outside of the Variety discussion are still on the table, and one of them may still happen. “It may not,” she said evasively. “I’m very picky.”

I asked if she was doing a syndication deal with someone like the tech-content site, paidcontent.org. She said I was “way off.”

Beyond cash, any company purchasing DHD must measure the emotional cost of getting into business with Nikki Finke. She is a handful by any measure, and will not be controlled by any boss. (You might ask LA Weekly’s editor Laurie Ochoa about that.) Many wonder that her aggressive invective has never led to a lawsuit. And I can state with certainty that the flacks of Hollywood live in terror of her calls.

That’s why she is perfect for the web. But from a business standpoint, her site is not scaleable (there’s only one of her).

Then there’s the problem of advertising appeal. “How do you monetize her 200,000 readers – through studio advertising? It’s not going to happen. Through high end consumer advertising? Very difficult,” said one interested buyer who kicked DHD’s tires and walked away. “Nikki could sell to somebody, but it’s not an easy sale. And it hasn’t been.”

Regardless, Nikki’s ethos – the wild and woolly, shoot-first-ask-questions-later — seems antithetical to the clubby and complicit culture of either of the trades. If it was ever there, the Variety deal is apparently over. But it will be fascinating to see what other suitors, if any, come calling for DHD.